Mothballs are one of the most popular, natural, and effective pest repellents out there.

But every day, worries about mothball toxicity and flammability grow. Bans on certain mothballs in Europe constantly fuel the worry.

So, in this article, we will examine the toxic nature of mothballs and shed more light on whether mothballs are flammable.

The flash points of dichlorobenzene and naphthalene show that both substances are combustible. This means that with little heat (176°F max), their vapors become hot enough to catch fire.

In fact, the pungent scents we often associate with mothballs are those of naphthalene, dichlorobenzene, or sometimes ammonia.

In solid form, these chemicals are less reactive with oxygen. As vapors, they burn easily, and that makes mothballs a potential fire hazard.

However, you shouldn’t worry too much about one or two mothballs if you keep them away from a naked flame or other ignition sources. But if you store large numbers together, the vapors can build up to start a huge fire.

What Happens to Mothballs When Heated?

In the science world, we say that such a substance sublimes, and this happens to dichlorobenzene as well. In November 2017, a research paper from the Caritas Toxicology Medical Center in China proved dichlorobenzene melts in hot water within 1 minute.

Whereas, whereas naphthalene and another similar substance called camphor do not melt at all. So, unlike naphthalene, dichlorobenzene will melt for a short while before it sublimes.

Now, since mothballs consist majorly of naphthalene or dichlorobenzene, then mothballs will sublime on heating. The fumes of mothballs so produced are what kill moths and repel other pests.

Also note that as a mothball sublimes, it decreases in size. So, at some point, the mothball will disappear completely. The time taken for this to happen depends on the number of mothballs present, the rate of airflow near the mothballs, and the ambient temperature.

For instance, an average-sized mothball disappears within two weeks. But if you place the mothballs under direct sunlight, the ambient temperature becomes higher than room temperature. So, the mothballs will sublime faster.

However, the problem is that mothball fumes don’t just disappear. Over time, they stick to clothes and other surfaces instead.

Outdoors, the fumes can affect the soil, plants, water supplies, and other innocent wildlife. For that reason, try not to use mothballs outdoors, if you use them at all. 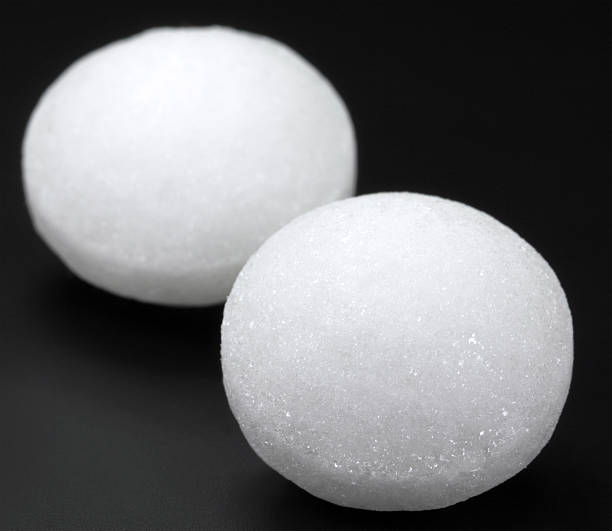 When mothballs are in their white solid form, they burn without exploding. But as said earlier, mothballs easily sublime into vapor.

This vapor, as it builds up, packs some explosive punch. If you confine enough mothball vapors in a small space and set them on fire, the resulting explosion can be so great.

What’s worse, the heat produced can spread to the solid mothballs and a full-scale fire can break out. So, yes, it is a very dangerous test, and we advise you against it.

This danger even doubles up for naphthalene-based mothballs. This is because, on average, naphthalene mothballs contain almost 99.9% naphthalene.

That means the lower explosive limit of naphthalene is just 0.9%. For that reason, you can use naphthalene as an explosive, and a powerful one at that.

Besides Flammability Hazard, Are Mothballs Toxic?

Yes, the benzene compound and naphthalene found in mothballs are carcinogenic to both humans and pets when inhaled or ingested. Yet, there’s little you can do to prevent inhaling mothball fumes while using it.

This is because mothballs’ effectiveness depends on how much they can keep pests away. To keep pests away, they need to sublime into concentrated and smelly fumes.

These mothball fumes impair the quality of air indoors. So, you can’t escape without inhaling the fumes.

When inhaled, mothball fumes can cause a spectrum of health problems to humans and to pets. Let’s highlight some of them below:

Exposure to dichlorobenzene mothballs can cause:

Exposure to naphthalene-based mothballs can cause:

Both mothball types can cause:

In this article, we noted mothballs are flammable because they often contain highly combustible naphthalene and dichlorobenzene.

Naphthalene, especially, can explode. So, mothballs made from it are explosive if you keep large numbers in an enclosed space.

Besides that, both dichlorobenzene and naphthalene-based mothballs are toxic to humans, pets, and plants alike. So, it’s best not to use them.

According to the Oregon State University, here are other safer alternatives you can use to repel moths from your fabrics:

That said, we hope you’ve learned a thing or two here. Bye for now, and see you in other articles.