While they may look fluffy, spider webs are actually very strong.

But… does this powerful nature make spider webs heat-resistant or are spider webs flammable instead? In this article, we have the right answers!

So, Are Spider Webs Flammable in Real Life?

While they may indeed be very strong, spider webs are flammable and can easily catch fire when set ablaze.

But unlike other combustible materials, spider webs melt and smolder rather than burn because their mesh contains tiny, narrow, and delicate threads that can hardly sustain fire. Even if they burn, spider webs do so with a low-intensity flame, and they rarely explode.

Most times, the intensity of the flame depends on the mass of spider webs available. The more concentrated and heavier the webs are, the more intense the fire.

Although, as a general rule, most spider webs will melt when the temperature rises above 95°F–113°F. This is because spiders actually make their webbing silk from the food they eat. So, spider silk, in a biological sense, is an animal protein.

Like most proteins, heat denatures the silk, and on high heating, it congeals. So, before long, a small mass of spider webs will fade and melt away. The bigger mass will take more heat and time. But eventually, it will melt down and collapse as well.

Yes, fake spider webs are flammable as well, and many people claim they are even more flammable than real spider webs. However, we think that this depends on the material composition of the fake webs.

Some fake spider webs are commercial products from large industries. Such webs often contain polyester components that are slightly flammable, burn slowly, and melt around 482°F.

So, to a large extent, fake webs made from polyester materials will resist more heat than real spider webs.

However, several homemade Halloween spider webs exist out there as well. Many Halloween fans make their webs with cotton balls and battings. This is because these two materials are quite cheap and easy to locate in local stores.

As we all know, cotton burns easily, and the ease doubles if the threading is thin. So, if you make thin webs with cotton, expect it to burn more than a real spider web.

Besides their flammable nature, fake spider webs, whether polyester or cotton, pose significant risks to rodents and birds. This is because most people forget to take down the webs once Halloween passes.

Whereas, the webs are strong enough to entangle birds and rodents. If the animals can’t break free, they eventually die, and a series of events like this happen often in the US.

Are Cobwebs a Fire Hazard? Can You Safely Burn Them? 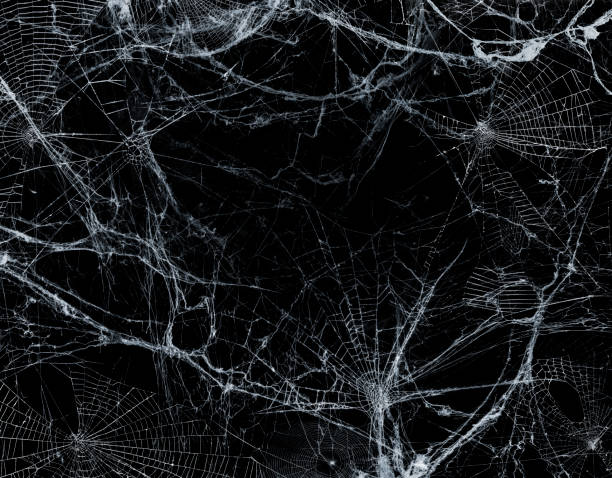 Basically, cobwebs are some kind of 3-D spider webs that Theridiid and Linyphiid spiders make. But in mundane usage, many people often refer to cobwebs as abandoned and dirty webs.

Sticking to that mundane meaning, we agree cobwebs would catch fire more easily than other spider webs. This is because, over time, these webs collect different dust materials, which may be flammable.

However, a tiny mass of cobwebs sitting in your ceiling corner shouldn’t be a fire hazard. Because even if you ignite it, the silk mass won’t be enough to spread the flame.

But for an abandoned house with several cobwebs hanging everywhere, the fire can spread through the webs and to other combustible materials like the wooden ceiling. Of course, this can cause a huge fire.

Besides that, humid cobwebs are weak insulators. That means they can allow slight voltage to pass through and can cause electrical sparks. So, when cobwebs and dust accumulate on electrical surfaces, fire can break out.

This is quite common on farms, and it’s one of the chief causes of winter fires.

So, to play safe, it’s best you just remove cobwebs as soon as you see them. Because who knows…, they may collect flammable materials over time or lay along electrical paths, and this may cause significant problems.

Are Spider webs Toxic and Poisonous?

Most spider webs are not toxic to humans. They are simply complex protein structures that have great economic importance. However, some spiders lace their webs with neurotoxins that can paralyze and kill their prey.

A good example of such spiders is the Asian golden orb weaver that laden its webs with a chemical called 2-pyrrolidinone that wards off moths, caterpillars, and other spiders.

Add to that, these orb weavers also produce neurotoxins that a 2012 research study confirmed to paralyze bees and other animals.

But naturally, the toxins from the Asian orb weavers cannot kill humans. Though it can inflict some pain and discomfort.

Are Some Spider Webs Heat Resistant?

Most spider webs are bad insulators and, with little heat, they melt. But according to a 2012 research paper from the Iowa State University, certain spiders spun silk with similar thermal conductivity to some metals.

In the paper, head researcher Xin-Wei Wang noted that some spiders, like the golden silk orb weavers, make silk that can conduct heat better and faster than copper, silicon, and aluminum.

He further stated that only a few substances like Silver and Diamond outperform this spider silk. So, he concluded manufacturers can use this silk to make better insulating parts for electronics, make heat-resistant clothes, and even bandages.

So, yes, some spider webs can resist substantial amounts of heat. Because to conduct heat, these webs need to absorb and hold heat without melting.

If we go by Wang’s statement, some spider silks are at least 800 times better conductors than other organic tissues.

In this article, we noted spider webs can catch fire, even at a temperature as low as 95°F. But they melt away rather than burn like wood.

Even when they burn, spider webs burn with an intensity that depends on the mass of the spider silk. The bigger the web, the more intense the fire.

Fake Halloween webs can also catch fire, especially if they are homemade cotton ones. But whether fake or real, get rid of spider webs anytime you see them.

If you need an exclusive highlight on how to get rid of spider webs, you can click here.