There’s a lot of mystery surrounding pyroflatulence—the art of setting your fart on fire.

Some say it’s impossible and that magicians who set their farts on fire mix other things with the food they eat.

In this article, we’ll unravel that mystery and prove if the fart is flammable or not? Believe us, the answer is very scientific!

So, Is Fart Flammable?

Yes, flatus aka fart, is flammable. That means it can catch fire when ignited. This is because our farts mostly contain blends of combustible gases like methane, hydrogen, and hydrogen sulfide.

In most cases, flatus gases form because of the activity of the bacteria that live in our gut. In the gut, these bacteria help with the digestion of fibers, produce vitamin K and promote other nerve functions.

After breaking down the fibers into smaller components that our bodies need, the bacteria liberate methane and hydrogen, especially as by-products.

Methane, as a common hydrocarbon, burns with a blue flame in oxygen to produce carbon (IV) oxide and water. At high temperatures and pressures of about 110atm and 662°F, methane can even auto-ignite. For that reason, methane gas is often a good fuel source.

However, in most human farts, methane makes up just 4% of the total flatus gases. This concentration is quite low to make your fart auto-ignite no matter high the pressure and temperature.

But then, your fart contains other flammable gases besides methane. Hydrogen, a highly flammable gas, and hydrogen sulfide, which gives putrid smells, are in farts as well.

These gases can also originate from the air we swallow while eating or talking. Combined, they can make your farts ignitable.

So, with a little spark or a naked flame placed close to your buttocks, you can set your fart on fire. But note that this may not be true at all times. It depends on the concentration of the flammable components in your fart.

These components may be different depending on what you eat. But we recommend you shouldn’t try to find out because setting your fart on fire is actually dangerous. 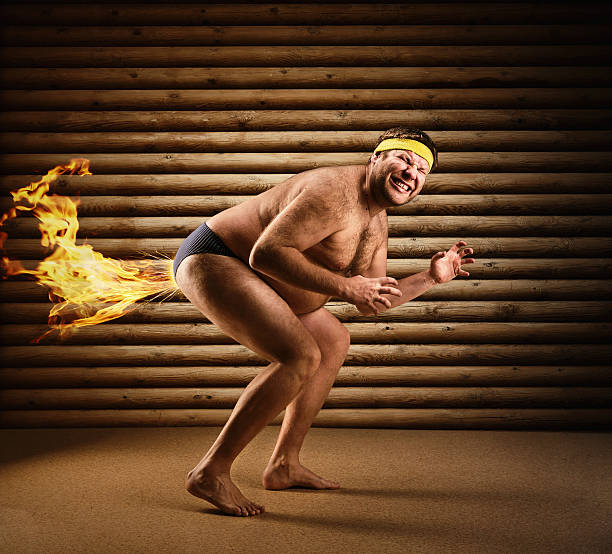 Back in 2016, a 30-year-old woman’s fart once caught fire while in surgery. According to the story, the surgery laser ignited her flatus gas and a small flame erupted.

Luckily, the fire caused a little damage. But it’s worthy of note that it made the news.

Then again in 2008, a young boy suffered severe scalding to his back legs and thumb while practicing pyroflatulence. Unlike the woman, the boy didn’t know he had gasoline can near him. Still, pyroflatulence is a dangerous game you should avoid.

But What Happens If You Ignite a Fart?

Depending on the contents of your fart, you may get a brief but huge flame when you ignite a fart. In other cases, you may get nothing.

Even if you do, it’s most unlikely that you’ll be able to convert your butt into a flamethrower using your farts, as we see in comedies and cartoons.

That’s because the amount of fart we produce at once is often around 25-100ml. This quantity can only sustain fire within a few seconds.

So, if you set your fart on fire, you will get only a few centimeters of flame except if you wear highly flammable underpants instead. This can cause severe scalds and burns, of course.

For argument’s sake, let’s assume you want to make a butt flamethrower using your farts. You will need to fart 20 times more than normal. On average, we fart close to 5 times a day.

For a common flamethrower to work, it needs about 15 -20 liters of fuel. If you’re using your fart as fuel and you fart 20 times more than average, you can only power a flamethrower for 3 minutes max!

Now, when your fart is on fire, here’s an array of things that probably happen:

The methane and hydrogen in your fart react with atmospheric oxygen and burn when lit by an open flame. In the end, carbon dioxide and water will form.

For now, there’s no clear evidence on why some humans make more fart methane than others. Although, there are certain small-scale studies that revealed that the more fiber you eat, the more methane your fart contains.

In farts, there is a minute level of potent hydrogen sulfide. This often smells like rotten eggs. But it is flammable as well.

So, when you set your flatus on fire, the hydrogen sulfide can burn, reacting with oxygen to form sulfur dioxide and water.

Can a Fart Be Explosive, and Can It Explode Inside You? 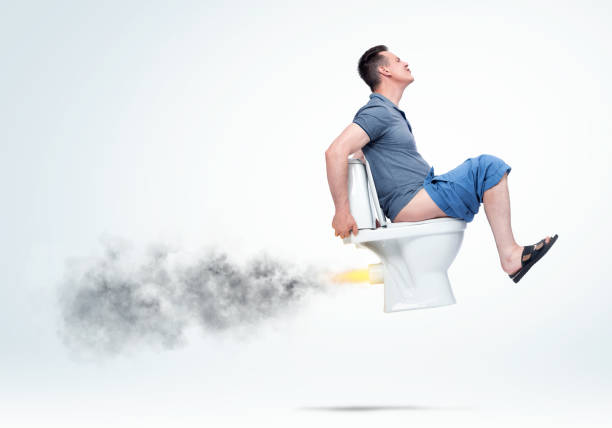 Farts may burst out of your butts with an explosive force. Sometimes, upcoming flatulence can even make you so uncomfortable that you feel you want to explode. But the thing is, farts don’t burn explosively.

Instead, that intense sensation you feel happens because too much gas gets trapped inside your gut. With nowhere to go, the gas pressure builds within your gut. But there are no records that prove that this pressure can cause your gut to burst.

The worst that can ever happen is the pain and loud bang that you feel as you forcefully fart to release the pressure. If you experience this chronic sensation too often, it’s best you visit a doctor.

Can You Use Fart as Fuel to Power Your Home?

Daily, humans fart between 5 and 12 times on average if you add the one you produce while you sleep. That’s equal to 0.6 – 1.8 liters a day, and the midway point lies about 90 ml per fart.

As said earlier, the combustible components of human farts are methane, hydrogen, and hydrogen sulfide. According to energy density data, methane has an energy density of 10.5 watt-hour/liter. Whereas hydrogen has just 2.8.

So, 90 ml of fart would have an energy density of about 0.11035 watt-hour/liter. According to Heatable, you will need the following fart quantities to power the appliances below:

That said, let’s talk about the overall power consumption in a house that uses one or more of the appliances above. According to a 2019 report, an average US home uses 10,649 power units a year. In the UK, the number can rise to 23, 529 for small houses.

To power such a house, you will need at least 2.5 million human farts. The number can rise above 4 million for large houses. So, you need a lot, and that makes it practically impossible to use human farts as fuel sources.

Besides that, there’s a wide difference in the composition of farts that humans produce. This variation may further reduce the power pack of each fart. That, of course, also reduces the possibility of using human farts as fuel.

In this article, we noted farts can catch fire, especially if they contain high amounts of flammable gases like hydrogen, hydrogen sulfide, and methane.

But unlike general belief, farts don’t cause fire explosions even though they can come out with an explosive force. However, this is not a green signal to try setting your fart on fire.

Pyroflatulence is very dangerous. If you’re not convinced, you can check out this story of pyroflatulence that went wrong.