In the bleak midwinter, a can of antifreeze often comes as a lifesaver for car engines.

Those antifreeze cans are cocktails of chemicals that make them a potential fire hazard, but not all of them and not all the time.

In this article, we’ll tell you about which types of antifreeze are highly flammable, what conditions set them ablaze and some safety tips to take home with you.

So, Is Antifreeze/Coolant Flammable?

The flashpoint of Antifreeze is 232°F. The temperature at which it auto-ignites is between 950 – 1245°F. So, in one sentence, antifreeze is as flammable as it comes, according to the National Fire Protection Association (NFPA). With the right conditions, it can light up and burn. Although, the intensity of the flame depends on the purity of the antifreeze.

This is because most antifreeze brands are water-based. That means they contain diluted ethylene glycol or propylene glycol in safety ratios (usually around 50% or so).

They ignite only on rare occasions. One such common occasion happens when a car is already on fire. With antifreeze in the car, additional fuel is available for the fire to keep burning.

Pure Antifreeze Vs Water-based Antifreeze: Which is more Flammable?

Well… pure Antifreeze is expected to be more flammable than Water-based Antifreeze. This is because it contains more glycol than the latter. But depending on the product, the glycol (which essentially is alcohol with more -OH) can either be ethylene or propylene.

Now, since most alcohols are normally flammable, a pure antifreeze also follows through. In fact, there have been a fair number of engine fires tied to the auto-ignition of antifreeze within an engine.

Although, it would take at least 65 to 95°F for such an auto-ignition to occur.

What happens when the antifreeze becomes diluted with water?

Well… there’s a lot of argument about this. So, to cut the lines clear, let’s get some things out of the way first.

When you mix a pure antifreeze with water in about a 50:50 ratio or more, it becomes a coolant. This mixture is very vital because of three reasons:

This is because water freezes anything below 32⁰F. Whereas, antifreeze has a freezing point that’s very close to 0⁰F depending on the type.

Water freezes more easily during winter. When that happens, the water expands, and that can fracture the enclosure meant to keep the coolant.

One reason for this is that antifreeze freezes at a higher temperature than a coolant (that is, an antifreeze mixed with water). With that, a pure antifreeze has a lower heat capacity to keep an engine cool.

So, it lowers the capabilities of a cooling system by almost 35%. In hot weather, this could spell significant damage to the engine.

Besides that, most brands of waterless antifreeze have performance-enhancing additives like silicates, nitrates and phosphates. Without water, the additives will settle on the metallic and rubber parts of the cooling system.

This will prevent the efficient supply of the additives to the destination point. Then again, the chemicals in those additives can corrode the parts of the cooling system affected.

So, it works better for your engine. After all, the main purpose of antifreeze and a coolant is to regulate the temperature of an automobile’s engine parts. That way, they both safeguard the car’s performance in hot or freezing weather.

Is a Diluted Antifreeze or Coolant Still Flammable? 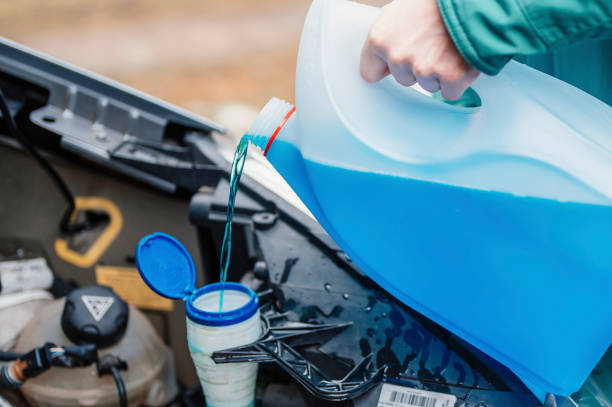 Since a coolant is a rough blend of antifreeze and water, we all expect that the water should help quench an engine fire. So, a coolant shouldn’t burn much before its fire dies out.

However, this suggestion is only true to a certain extent. This is because water evaporates quite fast, especially at very high temperatures.

Such hot conditions are not strange to engines. So, it’s most likely that the water in a coolant will dry up, leaving the glycol part to keep burning.

Then again, it can also happen that the ethylene or propylene glycol components may evaporate from the solution. The fumes can condense again nearby and then burn even when water vapor is present!

However, a lot of conditions need to be just right, and a temperature of at least 650- 750⁰F between in-vehicle metal surfaces is one of them. But as said earlier, such a high temperature is only possible if the car is on fire.

So, as a consensus, many automobile experts agree coolants can only be a secondary cause of the fire. Other primary hazards include powerful triggers like gasoline and short-circuiting within the car.

In this article, we noted that common antifreeze we around include ethylene and propylene glycol. In pure form, both antifreeze agents are flammable.

However, most manufacturers dilute their brands of antifreeze with water. This mixture is called a coolant. And in this article, we stated a few reasons coolants or water-based antifreeze are your better options.

But whether it’s antifreeze or a coolant, note these safety tips:

If you want to learn about other flammable liquids, click here. We’ll see you in those articles.