In the science world, Argon is a noble gas that’s often considered unreactive.

But what happens when you heat or puncture a tank full of this “noble” argon?

To answer that, let’s ask the big question; is Argon flammable and what can you do to keep safe if it is?

Just like xenon and other inert gases, argon will not ignite. The argon gas itself will not catch flames under normal conditions.

Argon requires oxygen to burn, so it won’t burn readily. And thanks to the non-flammability nature of argon, the earth’s crust and the atmosphere that contains some amount of argon are free from unsolicited spontaneous explosions.

Moreover, argon is used as a shielding gas in welding because of its non-flammability quality. No matter the amount of oxygen present, argon will not burn since it won’t react with the oxygen.

So the simple answer is no, argon is not flammable.

That Said, Can Argon Melt or Boil?

Earlier, we noted that Argon is a gas.

As a gas, can Argon boil or even melt? After all, the golden rule is that solid melts into a liquid. The liquid, on further heating, then boils into a gas. So, asking about the melting or boiling point of Argon sounds unreasonable, right?

Well… let’s surprise you; Argon melts at -308.2⁰F and boils at -302.8 °F. This means that Argon is simply a gas under standard conditions of pressure and temperature.

However, with the right but unstable conditions, it exists as a liquid and as a solid. For instance, at anything below 308.6F, Argon becomes solid.

So, yes. Argon can boil and melt under controlled and extreme conditions. You should only note that the temperature range is very narrow. It isn’t easy to notice a melting or boiling Argon.

How Do Scientists Explore the Non-flammability of Argon? 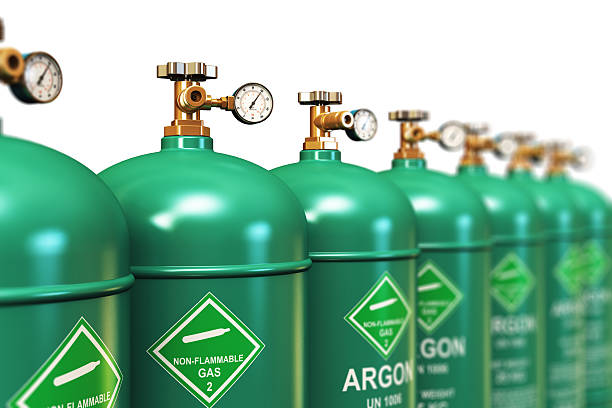 The major reason Argon doesn’t burn is because of its inertness and unreactive nature. This same feature allows scientists and engineers to use Argon for:

Can Argon Put Out A Fire?

Yes, argon can extinguish fires. Argon quenches flames just like xenon and, in the same manner, as genuine firefighting substances would.

However, you can resort to argon to put out fires when you have no other options

On a minimal scale, Argon is not toxic. Earlier, we noted it poses a little to no fire hazard because of its inertness.

However, if you inhale a large quantity of Argon in an environment with a low oxygen level, you might suffer from Asphyxiation.

In most cases, people experience the following symptoms:

Besides asphyxiation, Argon can also lead to frostbite. Often, this happens when your eyes or skin comes in direct contact with compressed argon oozing out from a storage tank.

When that happens, and it persists, it can lead to redness and gangrene.

But and in normal conditions, Argon is safe, non-flammable, and non-toxic. But this is not a neon sign for you to be careless around or with argon tanks and canisters. Caution should not be underrated; never!

If you breathe in helium gas for a long time, the gas can clog up your vocal folds and alter your voice. Owing to this, your voice produces a short, high-pitched sound.

Argon gas also behaves this way, but with a slightly different effect in the actual sense. When you breathe in argon gas, it would be quite difficult for you to exhale the gas again.

This is because argon gas is denser than air, unlike helium which is lighter than air and can be quickly expelled as it is inhaled. Thus, argon will penetrate faster into your lungs because you can’t exhale it.

Meanwhile, the presence in your lungs will do you no good than to trigger asphyxiation and other health hazards. Also, in contrast to the helium effect on your voice, argon will make your voice produce a low-pitched sound.

Under normal circumstances, argon is not poisonous. However, if you inhale argon in some concentrations, the gas can poison your system.

Inhaled argon gas goes directly to the lungs. There, it can do and undo such that when you face prolonged exposure to a leaking argon gas canister, you might first experience suffocation.

This is because argon competes with the oxygen that you breathe in. Unfortunately, it might even deprive your body of oxygen for a while. And when oxygen deprivation occurs in your system, of course, you should know you’re close to death.

But before the life-threatening effects, inhaling argon can cause you to experience symptoms like vomiting, nausea, fatigue, drowsiness, salivation, loss of consciousness, then death.

So far, we clarified that Argon is an unreactive noble gas. Because of its inertness, it is non-flammable and non-combustible. In fact, scientists used it to simulate an ideally protective atmosphere during experiments.

However, this doesn’t mean that Argon doesn’t come with its own sets of hazards. To guide again such hazards, try the following safety tips:

And that’ll be all. If you want to learn more about other flammable and popular non-flammable, hop on to this catalog. We have a boatload in stock for you!