Is Beer Flammable? Will it catch fire? - FlameVenge
Skip to content

Perhaps you’re the type that sips a glass of cold beer at the end of a long, stressful day. Then, this article is just for you. Here, you will learn some key facts about beer, discover if it’s flammable or not, and FAQs that can pique your interest.

The answer is no, backed by substantial reasons. Beer is not flammable in the actual sense, primarily because its alcoholic content falls between the 4% to 7% range. This range reads “low alcoholic content” and any alcohol that falls within this range cannot ignite.

Alcoholic beverages with alcohol contents above 50% are flammable. Liquors like snake venom (67.5%), concentrated tequilas, whiskeys, vodkas, rums, gins, and some special beers belong to this category. So, while most beers are not flammable, there are few flammable beers.

When these flammable beers or alcohols are brought close to a naked flame, they ignite readily. The ignition occurs because of the low water content in the alcohol. The water in the alcohol is not enough to quench the flame kindled by it.

To crown it all, beer is not a flammable liquor. However, some brewery protocols describe beers as combustible liquids.

At What Alcoholic Degree is Beer Flammable?

Beer is prepared from a mixture of water, ethanol, yeast, malt, sugar, and hops. They have an alcoholic degree that lies between 4% to 7% which is not capable of flammability.

However, there are some once-in-a-blue-moon beers with higher alcoholic content above 50%. These beers can ignite materials. But then, they are not totally flammable.

Even the most popular beers, Budweiser, Heineken, and Bud Light are not flammable. Budweiser beers contain about 4%-5% alcohol, which is not strong enough to burn. And just like every other beer, Bud Light has low alcohol and a high water ratio. Hence, they cannot catch fire.

Now, this leads us to wonder if beer is flammable during its making. Let’s explore.

Is Beer Flammable During Fermentation?

During the process of beer production (fermentation), only limited alcohol is involved. And because of this low alcohol, there’s no way for beer to ignite during the process. Only a grave mistake can make you get higher alcohol than normal during fermentation.

Mistakes during the process aren’t that common. Since beers are always prepared by experts at breweries. However, the result of your/the brewery’s silly mistake might cause a flammable beer. Don’t sweat on this though, it’s an unusual event.

What is the Flashpoint Temperature of Beer?

All beers are above the 3.5% ABV. Beers with 5% alcoholic content usually have their flashpoint fall between 100°F and 200°F.

Beers are categorized into two classes of combustible liquids. The two forms are class II and class IIIA. The flash point temperature of beers under the class II division is always between 100°F and not more than 140°F. Other flashpoints that lie between 140°F to 200°F belong to class IIIA beers. 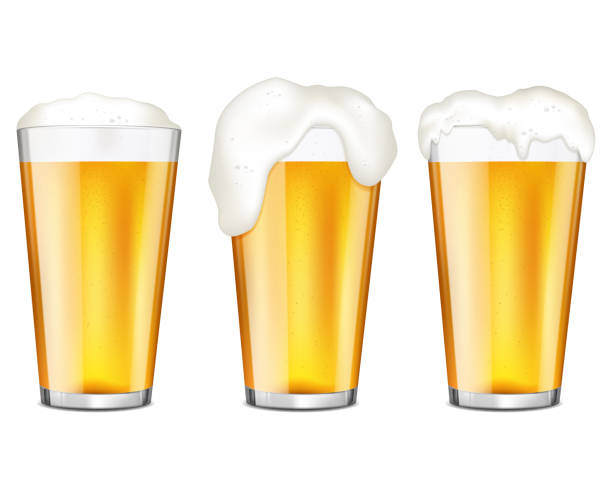 While beer is not flammable, beer gas is flammable. There are some safety precautions you need to observe while handling the beer gas. Poor gas safety practices can come with a lot more damage than you can ever imagine.

Most times, beers are distributed or transported to strategic locations in kegs. Once these kegs burst because of poor safety practices from your end, the beer gas leaks out. And as usual, in the presence of air, the gas explodes and ignites.

To avert the casualties that might accompany this explosion event, observe the safety precautions.

The draft magazine reveals beers explode because of over-carbonation. Carbonation is saturating beer with enough carbon dioxide. So during fermentation, the beer bottles need to be left open to complete the carbonation process.

If carbonation is half-completed in covered beers, the beers heat. The remaining carbon dioxide gas that does not saturate with the beer will build up pressure. Such that, when the beer bottle is opened, it explodes immediately and breaks the glass. This can cause severe injuries.

The above carbonation process explains the beer’s explosion. Beer explosion differs from its ignition. Its ability to catch fire in the presence of air is known as its ignition process.

No, beer can not attract flames. This is because of their low ethanol and high water composition. Besides, beers can curb some liquids’ flammability. Remember, it owes this to its water-rich nature.

Cocktails are originally flammable. However, if beer is added to it as a base ingredient, it will kill the cocktail’s ability to ignite.

What comes to your mind when your vehicle’s tire suddenly catches fire? The firefighters are already on their way to rescue you. But then, you know you don’t have to die before their arrival. So the only thing that should bother you at that moment is if that freaky bottle of beer you bought on the way can be of any help to you.

And oh yes, you are thinking the right way! Beer can quench fire because of the substantial amount of water it contains. Now, what’s next? Come on, grab the bottle of beer, shake it and sprinkle it on the burning tire till the last drop.

Stay some distance away after “the operation beer”, *winks*. Back to the tire. It is going to explode. However, the fire will stop and you won’t have to burn to death before the arrival of the firefighters. A bottle of beer can be a lifesaver, now you know.

This article spotlights everything you need to know about beers, their flammability, nature, and other noteworthy details. At least, now you can drink your beer without worries.

Moreso, if you go wrong with your beer and you need a lifesaver measure to curb its flammability. Digest the below gas safety tips and off you go.