Brake fluid is a vital supplement that your car’s hydraulic system needs.

In this article, we’ll review that and confirm if brake fluids are flammable?

Depending on the kind, the flash point of brake fluid is between 210° and 75°F. Its self-ignition temperature is about 675°F.

However, brake fluid can catch fire if it spills on boiling surfaces like naked flame, car exhausts or manifolds. So, you can consider brake fluid to be highly combustible and because of its low auto-ignition temperature, it can be a primary cause of vehicle fire.

Although for brake fluid to ignite, it must come in contact with high temperature. If it does, it can cause a huge fireball that can spread to other combustible parts of the car. Such parts can include rubber casings, air filters, cable and plastic covers.

Why Does Brake Fluid Catch Fire?

Brake fluids light up because, most times, they contain flammable components called glycols. Ordinarily, these glycols catch fire with ease, especially when they are in concentrated forms.

However, not all brake fluids contain glycols. Some modern-brake fluids now contain liquid silicone. So, the degree and ease with which your brake fluid will catch fire depends on its type.

Let’s look at the three common types below:

The DOT part simply means the United States “Department of Transportation.” So, that tag comes from there.

That said, DOT 3 brake fluids are glycol-based and often amber. They’re partially soluble in water. And they have a boiling point of 482°F. So, they can withstand some level of hot and cold conditions without boiling or freezing up.

However, because they are glycol-based, their flash point is around 230°F. So, they can catch fire.

Like the DOT 3 fluids, DOT 4 brake fluids also contain glycols. Although sometimes, they can also contain borate esters, and this puts their flash point at anything between 210° and 75°F.

Unlike others, DOT 5 brake fluids are not glycol-based. Instead, they are made from silicone, which has a higher flash point than glycols. For instance, dimethyl silicone liquids have a flash point of 572°F.

Often, DOT 5 brake fluids are purple, shouldn’t be mixed with other types and they don’t absorb water.

Unlike other kinds of brake fluids, most brands of DOT 5 advertise their products to be non-flammable. Although, a good number of them still burn, though with lesser ease than glycol-based ones.

Normally, brake fluids can’t burn at ordinary temperatures. At the high temperature they burn, they don’t explode, as opposed to gasoline and other combustible substances.

In most cases, their explosive power is only that you see from candle wax, vegetable oil, or even baby oil.

However, at a certain temperature greater than 675⁰F, brake fluids can auto-ignite (start burning with no ignition source, like a naked flame or hot surfaces). If you kept the brake fluid in a container, the combustion would evolve a lot of heat.

This heat can cause the brake fluid to expand. If this expansion continues potentially enough, the resulting pressure built up inside the container can tear it apart. In the end, a loud bang or explosion may happen.

Then again, brake fluids can explode if you mix them with chlorine. Following soon after, the explosion will be a fireball. This happens because of the reaction between chlorine, a powerful oxidizing agent, and the glycol components inside the brake fluid.

Gasoline taught us a lot about fire. One golden lesson among them is that water cannot put out all kinds of fire.

With brake fluid fires, avoid spraying a direct water stream to extinguish the fire. Instead, try any of the following media:

That said, note that you can use indirect water sprays to: 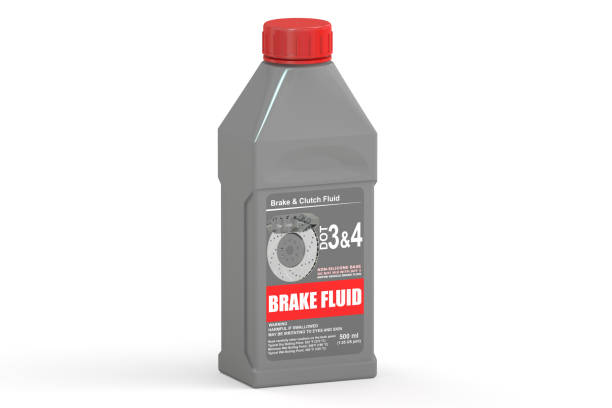 Yes, brake fluids are toxic and corrosive as well. They eat through paints, plastics and rubbers when left long enough.

Then again, just about 100 ml of brake fluid is enough to kill a man. If you’re lucky enough to survive that, you will still have severe damage to your brain, kidney, liver and heart.

Among the brake fluids, DOT 5 brake fluids are not as corrosive as others. In fact, they don’t affect paintings and can even prevent rusting.

In this article, we noted that brake fluids are not classified as flammable. But they are highly combustible because of their glycol components.

That means they can catch fire, although it takes very high temperatures to light them up. So, you have to be careful when handling brake fluids, and when disposing of them.

When disposing of brake fluids, there are certain things you must note. Here are some of them to take home with you: