Is Butter Flammable? Can butter explode? - FlameVenge
Skip to content

Butter appears like one of the safest foods in your kitchen, right?

But do you know that butter can actually catch fire in the right conditions? Well… in this article, we’ll discuss more on that as we try to unravel those things that can make butter flammable.

Butter is not flammable because it often has a flash point (or rather, smoke point) around 302°F. But when melted or misted, butter can catch fire when the temperature is hot enough to burn it. In fact, some traditional lamps use ghee (clarified butter often made from yak butter) as fuel.

This is true because butter is solid fat. That means it contains mostly fats and a small quantity of water. So, it’s just like any other plant or animal oil (say vegetable or palm oil), only that it is solid.

Like other organic oils, butter has a smoke point. Otherwise called burning point or flash point, this refers to the temperature at which oil can burn continuously with a bluish flame or smoke. The lower the smoke point of an oil, the faster it burns.

Luckily for us, the smoke point of many oils is above the standard temperature we often cook with. For instance, the average temperatures for pan frying, deep frying, and oven baking are 248°F, 320°F, and 356°F.

Whereas, avocado oil, vegetable oil, and olive oil have smoke points pegged at 520°F, 470°F, and 428°F. So, you’re safe while deep frying these oils within a reasonable time limit.

However, butter’s smoke point is quite low (302°F). So, it catches fire more easily than other oils, and for that, butter is rarely a good choice for deep frying and high-heat cooking.

In moderate ovens, a good number of factors can affect how soon your butter burns. We’ll discuss this later.

What Happens When You Heat Butter?

As said earlier, butter contains fats and water, which is non-flammable. In most cases, the fats in butter come from milk products like cream and cheese that melt below 140°F. Butter inherited this low melting point and, as a processed product, it melts around 90°F–95°F.

So, if you heat butter to that temperature, it melts. At 185°F, the milk solids in the butter will separate from the liquid fats. Here, ordinary butter converts into clarified butter, often used to bake and toast bread.

If you continue to heat the clarified butter (say up to 250°F), the butter turns brown. This happens because the milk protein undergoes a process called the Maillard reaction.

At the end of the reaction, the butter will have a paltry amount of milk sugar and sufficient amounts of proteins. According to some cooking experts, this so-called brown butter is flavor-rich.

Beyond browning and at about 300°F, the butter will emit fumes or bluish smoke, turn black and become scentless. It can even catch fire, depending on how hot the fire gets, the amount of butter, and how concentrated the fumes become. 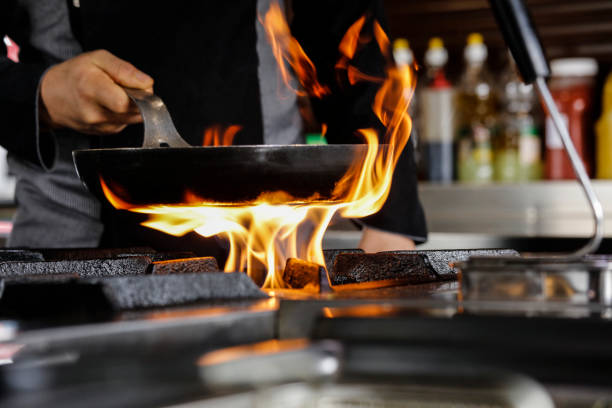 In this section, we’ll look at some factors responsible for that:

Earlier, we noted that ordinary butter will burn when kept inside a moderately hot oven (375°F – 400°F). But the story will be different if you only expose it for a short while (say less than a minute). Above that, the butter will become tasteless and badly burnt.

Although, the time taken can also vary with size. A smaller mass of butter will burn faster than a bigger one under the same condition and cooking time. So, if you burn two distinct masses of butter at 400°F, the smaller one will burn out earlier.

A refined butter should have more fat than normal butter. This is the case with clarified butter, and that’s because it no longer has other components like milk solids and water.

Now, the thing is, the more water in butter, the faster it melts and burns. For instance, Ghee (an example of clarified butter) burns and melts much slower than normal butter. This is because it contains less water and a higher smoke point.

However, you can increase the rate at which most butter burns by adding table salt. Table salt lowers the melting point and smoke point.

Some brands of butter contain shea, peanut, or even yak. Yak butter used in clarified butter burns so much that locals use it to power lamps. In the next section, we’ll discuss briefly how flammable shea butter and peanut butter can be.

Besides that, the less acidic a butter sample is (that is, the lesser the Free Fatty Acids it has), the slower it breaks down, burns, and emits smoke. So, butter samples with a low FFA often require high temperatures before smoking begins, hence their high smoke points.

Some Kinds of Butter and Flammability Explanation.

Can You Burn Butter in a Microwave? 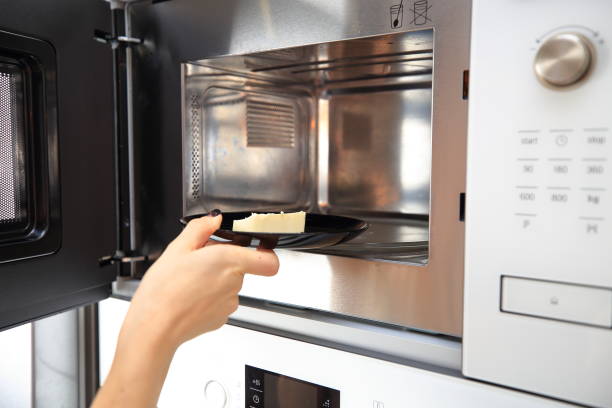 Out there, microwaves come in different wattages. But as far as we know, anything between 70 and 1000 watts is enough to cook and heat most of the things we eat.

So, if you put a few teaspoons of normal butter in a 700-watt microwave for 3min+, it surely will burn, lose the scent and turn black.

Is Margarine Flammable as well?

Like other oils, vegetable oil has a smoke point of about 430°F. So, when the temperature is hot enough, margarine burns as well. It’s just that normal butter boils quite faster than margarine, though you need to consider several factors.

In this article, we noted that while margarine and butter don’t classify as flammables, they both can catch fire. This is because essentially, they are solidified organic oils, and like other oils, they can burn when the temperature matches their smoke point.

We already talked about smoke points and factors that affect how butter burns in this article. So, find your way to the sections you need. But here are a few tips to keep safe while using butter:

That said, you can read other Flamevenge articles here.