There are a lot of machines and home appliances that use diesel as their fuel. If you are an owner of one or more of these appliances and you are wondering whether having them around ignition sources comes with a risk or not, then let’s look at if diesel is flammable.

YES. Diesel is flammable when it comes in contact with fire and other ignition sources. Different health and safety regulatory agencies of different countries have marked it as a flammable fuel.

However, there are different diesels being produced nowadays, and each has its unique properties. Therefore, the rate at which they burn differs from each other.

It’s necessary you have some knowledge of what causes diesel to burn. Also, you need to know about the different machines that run on diesel that you might have around you, as well as their properties.

This helps you in deciding your choice of machines and home appliances and lessens/prevents the risk that comes with owning them.

What causes diesel to burn?

Diesel fuel is a mild-volatile, combustible liquid that is often employed as fuel for diesel engines. It is one of the liquid substances got from the fractional distillation of crude oil.

When ignited or self-ignited, the complete combustion of a diesel fuel yields carbon dioxide and water.

We do not find diesel free in nature. One method of obtaining it is by breaking down crude oil into several substances. We term this process fractional distillation of crude oil.

How is diesel fuel made from crude oil?

The first major step in this production of diesel is the mining of crude oil. Crude oil is a mixture of different hydrocarbons that can be separated over different ranges of temperature and boiling point.

Therefore, fractional distillation operates on the principle of boiling point. A tall fractionating column partitioned into different parts separated by trays is placed over the crude oil mixture.

The crude oil is heated to a temperature of about 400 degrees celsius and allowed to evaporate. The evaporated crude oil then enters the fractionating column and the condensers extrude out at different parts of the column.

Diesel is a mixture of high-molecular-weight hydrocarbons with carbon numbers majorly in the range C9-C20. It has a boiling point range of 163-357 degrees celsius.

It, therefore, condenses closer to the bottom of the fractionating column because of this higher boiling point.

The volatility of these high-molecular-weight hydrocarbons makes diesel oil a highly flammable substance.

Diesel has been produced from other sources. These sources include biomass, natural gas, biogas, animal fat, and liquefaction of coal.

The production of diesel oil from these sources has resulted in distinct qualities. Different diesel fuels have slightly unique properties depending on the mode of production.

This influences their respective flash point and their applicability. The flash point of a material is the minimum temperature at which it is ignited when it comes in contact with an ignition source, even after they completely separated the source from it.

Let’s review the different diesel fuels in society and their properties. 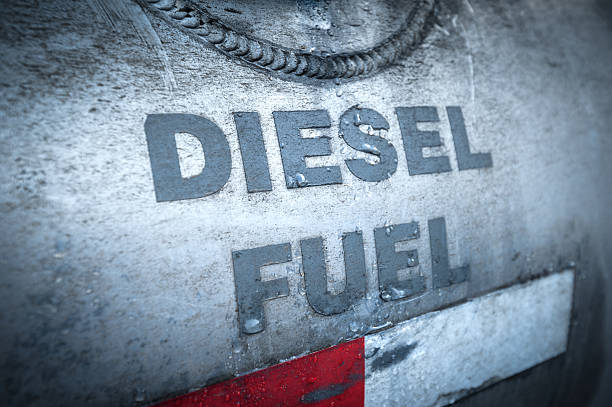 1. Petrodiesel: This is also commonly referred to as petroleum diesel or fossil diesel. It is obtained from the fractional distillation of crude oil at a temperature range of 163-357 degrees Celsius under atmospheric pressure.

It is widely employed as fuel in construction vehicles, trains, farm trucks, and commercial vehicles.

The flash point of petroleum diesel ranges between 52-82 degrees celsius.

2. Biodiesel: Biodiesel is a renewable type of diesel that is produced from organic sources such as vegetable oils, animal fats, and food waste.

It is also employed as fuel for electricity generators that use biodiesel engines, also as heating oils, fuel filters, lubricants, and oil spill cleanup.

The average flash point of biodiesel is approximately 150 degrees celsius.

3. Synthetic diesel: As the name implies, this type of diesel is manufactured synthetically using chemical processes, which include the Fischer-Tropsch process.

It is sourced from substances with carbonaceous content, such as natural gas, coal, biomass, and biogas. It is employed as fuel for cars, jet engines, planes, and ships and is also used to improve the quality of petroleum fuels.

The average flashpoint of synthetic diesel is approximately 55 degrees celsius.

4. Hydrogenated oils and fats: This type of diesel is synthesized by converting the triglycerides in animal fats and vegetable oil to higher molecular weight, volatile alkanes.

They have similar properties to a synthetic diesel, such as flashpoint.

All the diesel fuels above are flammable even when they differ in properties from one another. Petroleum diesel might burn faster compared to biodiesel. However, they are all still flammable.

Therefore, it is better to stay away from fire and fire-causing agents especially when you have some diesel/diesel-containing substances to protect.

Sit down! Have a critical review of what you want and what you have before choosing where to keep/place your diesel fuel and diesel-containing engines.