Duct tape, aka duck tape, is a multi-purpose polythene material with some magical properties, if you ignore the science.

For one, you can easily tear duct tape with your hand. Yet when used both indoors and outdoors, it is astonishingly durable, water-resistant, and extra-strong.

But does the magic make duct tape heat-resistant as well or perhaps, is duct tape flammable? Let’s find out!

While duct tape may indeed be water-resistant, most duct tapes are flammable and will catch fire when exposed to open flames or any other ignition source hot enough to burn and melt it.

This happens because most duct tapes contain a tiny fabric mesh at their core. Depending on the material used, this core can normally catch fire.

However, for duct tapes that meet the industry-standard requirements, the fabric core must contain non-flammable polythene and a rubber-like adhesive.

For that reason, many standard tapes are heat resistant to a certain degree. In fact, some tapes can even withstand up to 200°F. Above that, the duct tape will burn and melt.

Two good examples of places where not to use your duct tapes include heating vents or HVAC systems and electrical junctions.

According to them, only duct tapes failed the HVAC resistant examination out of 19 different sealing materials they tested. So, it’s best not to use duct tapes in places exposed to extreme heat.

Why Does Duct-tape Melt and at What Temperature Does It Happen?

Because of the adhesives it contains, many standard duct tapes won’t catch fire.

Above that, duct tape will melt and it can even burn with a low-intensity flame. This happens because duct tapes contain polythene materials and rubber adhesives.

But with increasing heat, the tape may lose its adhesive property. So, it may fall off or loosen its grip at the point of the material taped.

Around 180°F, the rubber part will melt and it can even burn with low intensity. However, different tapes have different heat tolerance. In the next section, we’ll examine that.

There are so many tapes out there—often cheap but meant for different purposes.

For instance, it is not advisable to use ordinary duct tapes in place of electrical tapes. Likewise, you shouldn’t use gorilla tapes where scotch tapes will work better.

So, let’s examine the unique properties and where you can likely use each tape: 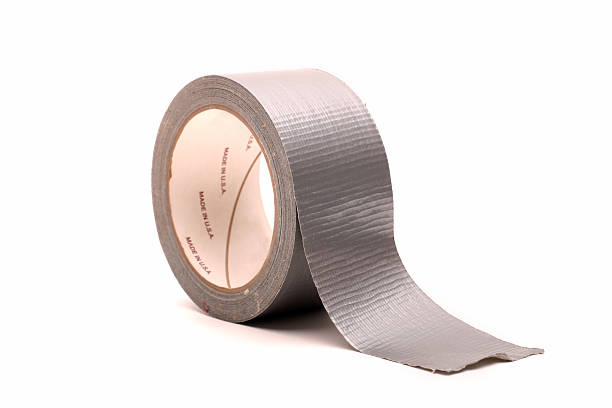 Regular duct tapes are the silver ones we often see around and used to fix almost anything. But among tapes, these tapes have the lowest heat resistance. Currently, there’s no verified temperature for that.

But anything above 140°F, most regular duct tapes will lose their grip and melt. So, you shouldn’t use them in places exposed to high temperatures.

However, you shouldn’t encounter any problem fixing your broken charger cord with duct tapes. That’s because most charging cables are about 5 -10 volts. So, any tape should have enough insulating skill to match up with that.

Among duct tapes, the gorilla tapes have one of the highest heat resistance. According to the brand making, gorilla tapes can withstand up to 150⁰F.

Besides that, some UL-listed electrical tapes can resist humidity changes in the environment. You expose some of them to the sun. And a good number of them resist fire, water, and overheating because of electrical sparks.

In most cases, UL-Listed electrical tapes can work optimally at about 212⁰F. Above that, they may melt depending on the tape in question.

Here’s a list of some electrical tapes and their melting temperature:

You should note that Scotch tapes are just a brand of vinyl electrical tapes that work optimally around 221⁰F. A good example is the 3M Scotch heat-resistant electrical tape.

Like most electrical tapes, scotch tapes have high heat resistance, are non-flammable, and won’t melt or lose their adhesive below 221⁰F.

Masking tapes prevent paint spills onto automotive parts, furniture, floors, and others when painting. Out there, you will find different tapes with different heat resistance and melting temperature.

These tapes comprise paper laid over a high-pressured material and an adhesive.

When exposed to an open flame, the paper part can burn although with low intensity. Because as the tape gets hotter, the adhesive can dry up.

Once it dries, the paper can catch fire and burn when exposed above 140⁰F.

These are quite thicker because they use non-flammable plastic components instead of paper. So, they don’t catch fire or melt easily.

In this article, we established that most tapes are not flammable. They are actually heat resistant and most of them will work just fine below 140⁰F.

Above 200⁰F, a good number of tapes will melt. Even though some tapes, like silicone tapes, can withstand up to 500⁰F.

But you can be too cautious around tapes. Here are two golden safety tips for using tapes:

Out there, you will find different fire extinguishers designed for various classes of fires. You can learn more about that here.