Is Flour Flammable? (Flour is flammable) - FlameVenge
Skip to content

Among them, combustible foods like flour are some of the major causes of such fires.

In this article, we will discuss why flour is flammable and how you can play safe around it.

Flour is flammable—it catches fire easily and under the right conditions, it can explode on its own with a loud bang. This is because most flours contain starch, which, like other carbohydrates, can burn when dry and suspended in the air as a dust cloud.

As a dry powder, flour gets dispersed in the air with great ease and in large amounts. With time, more flour particles collect in the air to increase the surface area. The resulting surface area then increases the air-to-fuel ratio of flour.

In fact, it takes only about 2g per cubic foot of flour dust in the air to catch fire when ignited. Worst still, each grain is so tiny that it burns almost instantly.

During the 19th century, unexplained explosions were common in flour and grain processing industries. After a series of investigations, it turned out that dust explosions in grain elevators and other sections were the underlying causes.

At what temperature does Flour Catch Fire? 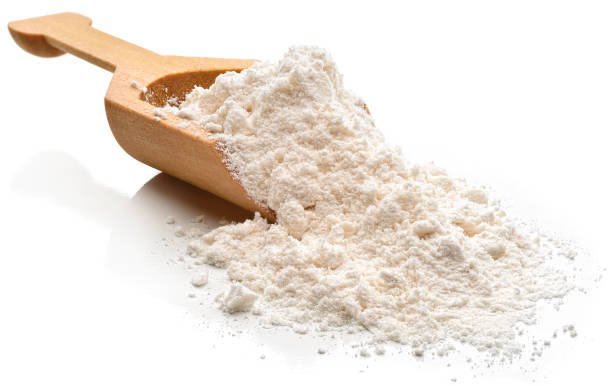 There is no specific temperature at which flour burns. But one thing is sure; flour can burn when the heat is hot enough to set it ablaze.

According to consensus, it’s best not to expose any kind of flour to anything above 350°F. Above that, the flour will catch fire, and that’s why you should bake your pastry flours at temperatures below 350°F.

The reason for this difference is that flours come from different food substances and different people add various substances to them. Let’s look at some of these flours and what their ignition temperature is likely to be:

All-purpose flour is simply plain flour, and it is the common type used for baking. Often, most brands make their all-purpose flour from the innermost kernel found in the wheat head.

This is simply a regular flour with salt and baking powder already added. It’s different from common all-purpose flour because it is softer and it contains a lower amount of protein.

According to the research from the Diary and Food Engineering Department at the University College of Ireland, self-rising flour has a minimum ignition temperature between 460°F and 592°F.

According to a journal published in 1984, that value varies with the particle size of the flour. The smaller it is, the higher its minimum ignition temperature.

Grain dust is the dust particle produced when harvesting and handling barley, wheat, maize, oats, rye, and other grains.

These are highly explosive and they have an ignition temperature of about 806°F.

Other food dusts like pudding mix, sugar, and even powdered milk explode under the right conditions as well.

Why is Flour So Flammable?

Flour catches fire and explodes when too much of its dust builds up in air supplied with an ignition source.

This happens because of two major reasons—its carbohydrates component and the concentration of its dust particles in the air in an environment that’s hot enough.

Let’s explain that below:

Most carbohydrates become flammable when concentrated in a dust cloud. When ignited, their molecules burn rather rapidly because of instantaneous expansion.

In most cases, the ignition source is naked flame or heat. But the rapid expansion occurs because the dust cloud prevents the molecules from escaping.

The build traps oxygen and with the right ignition, the flour goes kablooey. In large amounts, you may even hear a loud bang.

Sometimes, flour particles may burn without an ignition source. This is common in grain mills and flour-processing plants.

For that to happen, the flour particles collect in the air to form a dust cloud with a large surface area. The surface area then increases the air-to-fuel ratio of flour.

What Are the Conditions Required for Flour to Burn and Explode?

Unlike gasoline and some other flammable liquids, flour kept inside an enclosed container (say bottle) doesn’t just explode suddenly.

Certain conditions must be present. Because unlike gasoline, which has a low flash point, flour, like other solids, has none.

So, let’s run through the important conditions below. Once you know them, you also know what to avoid to stand clear of flour-induced fire hazards:

In this article, we clarified that flour is flammable and it can explode even if the raw materials used to make it are not. Marshmallow is a great real-life example to prove this.

So, you need to be cautious with the way you handle flour dusts to avoid the sad stories that happened in the 19th century.

Emphasizing the caution part, here are some key takeaways you need to remember: