Is Freon Flammable or Explosive? - FlameVenge
Skip to content

Freon is the brand name for a group of refrigerant gases manufactured by the Chemours Company. Meanwhile, these gases are usually found in refrigerators, air-conditioners, freezers, and other cooling systems.

However, as a source of chlorofluorocarbons (CFCs), Freon pollutes the atmosphere, posing an enormous threat to the ozone layer.

So, in this guide, we will enlighten you more about Freon, and provide ideal answers to the public query, “is Freon flammable?”

Freon, also known as Freon-12, R-22, R-13B, or R-12 is a popular, scented refrigerant gas. On the other hand, Freon™ is a registered trademark for a collection of halocarbons produced by the Chemours Chemical Company.

Owing to this special quality, Freon is often used as a propellant for aerosols and since Freon does not burn easily, it can be used as a coolant in refrigerators. The halocarbons in Freon can also develop into a group of pollutant gases known as chlorofluorocarbons (CFCs).

However, a study reveals that chlorofluorocarbons in the atmosphere account for the depletion of the earth’s ozone layer (the earth’s shield against excess ultraviolet rays).

CFCs deplete the ozone layer gradually and if the production of this gas is not stopped in time, the greenhouse effect might occur. Eventually, the earth should be ready to face global warming.

This environmental aftermath of Freon products raises concerns among its users. Some Freon users now wonder if Freon is also a fire risk.

So, Is Freon Flammable?

Under normal circumstances, and at room temperature, Freon chemicals are not flammable and not combustible. Plus, Freon products are classified as A1 refrigerants.

A1 refrigerants have low toxicity and little or no flammability. However, note that Freon can deviate from its non-flammability nature when subjected to extreme heat.

That is, at high temperatures, pressurized Freon in containers can catch fire and explode.

Why Does Freon Explode?

Freon containers can explode if it experiences a change in pressure and face overexposure to naked flames. Naturally, when flames are exposed to a gas container, they make the air around the container hotter.

Heat provokes gases and makes them combine rapidly with one another in an enclosed space resulting in increased pressure. If this heat keeps getting hotter, the pressure in the confined gas container will expand to a limit.

At this limit, the container is likely to explode to balance the pressure. Freon explosions are usually fatal because some toxic gases are given off during the process.

At What Temperature Does Freon Condense? 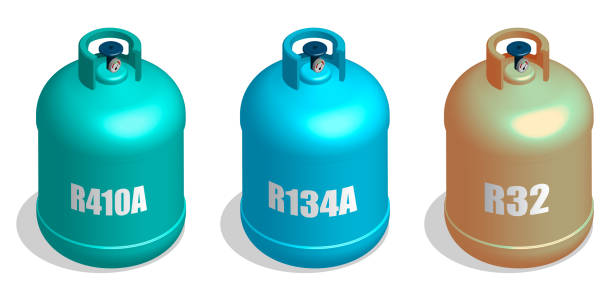 When a gas transforms from a gaseous state to a liquid state, it is said to undergo condensation. Freon gas condenses rapidly, which is one reason it is suitable as a coolant in refrigerators.

First, Freon evaporates at fairly high temperatures between 40°F and 50°F. Afterward, it condenses between 120°F to 140°F.

No, liquid freon is not flammable. Just as steam, water, and ice behave the same way in chemical reactions, liquid Freon and Freon gas also react the same way (although Freon is chemically unreactive).

Thus, if a Freon gas is not flammable, a liquid Freon won’t flame up either. In most cases, liquid Freon is usually less flammable when compared to Freon gas.

The simple answer is no. Freon can not catch flames, but to some extent. This is because the bond that binds Freon atoms together is quite strong to break.

Owing to this, Freon will not catch flames or burn readily just like a cork at low temperatures. Nevertheless, Freon is likely to explode at certain high temperatures.

How To Put Out Freon Fires

Perhaps you unluckily encounter a Freon explosion and you don’t know how to go about it. Here’s what you can do.

For small fires, spreading a fire blanket on the scene can prevent the fire from spreading around your home. But with large fires, seek the service of professional firefighters instantly.

Just like Xenon, Freon has a lot of uses owing to its low toxicity nature. And even though it is mostly used in the manufacture of aerosols and some refrigerant gases, it has other applications.

In the medical industry, Freon is used in the manufacturing of special medications like inhalers for asthmatic patients. Freon can also manufacture vapor coolant spray (a mild anesthetic) to relieve abscesses, boils, and other skin conditions.

When inhaled in minute concentrations, Freon gas is not toxic. However, breathing in high doses of Freon can cause “Freon poisoning,” which you can also call “refrigerant poisoning.”

Below are some signs that show a person has been poisoned with Freon gas. Let’s take a look at them:

How To Treat Freon Poisoning

Once you notice any of the above Freon poisoning symptoms, the first step to take is to move away from the area contaminated with the Freon gas. Also, make sure you move to a well-ventilated area so you can at least inhale some pure air.

Thereafter, seek medical attention before the gas spreads and damage some of your vital organs. Medical practitioners can help treat Freon poisoning through several methods, such as recommending Freon antidotes, prescribing medications, and cleaning the affected skin.

Likewise, an intermittent supply of oxygen, belly pumping, and the use of IV fluids help in treating Freon poisoning.

Freon is a non-flammable refrigerant gas, although it is likely to explode in the right conditions. This guide features everything you should know about Freon and its flammability.

Additionally, Freon expels toxic gases when it explodes, and these gases can be poisonous when inhaled in large quantities. Visit here to check out the safety data sheet for Freon.