Motor oil is a type of engine lubricant for cooling internal combustion engines. It is used to reduce friction and wear in the engine of vehicles. It’s also one of the most used consumer products in the world.

A car engine is a tight environment for fluids, especially if it’s hot. But oil is an oily substance, right? So should we expect engine oils to catch fire and burn easily?

Read on to find out more about whether (motor oil) engine oils are flammable and what makes them combustible under specific operating conditions.

There is some confusion over if engine oil is flammable. In the strictest sense, “flammable” means something is easily ignited and burns quickly. So engine oil is not flammable.

However, engine oil can ignite at high temperatures just like other similar non-flammable liquids and burn for long periods. This means it’s not strictly non-flammable, but the terminology is misleading. When people talk about flammable chemicals, they usually mean liquids that are easily ignited and burn quickly.

This is obviously very different from the way engine oil behaves. So keeping things simple, it’s probably best to say engine oil is combustible, not flammable.

Can Motor Oil Cause Fire On Its Own?

Engine oils rarely, if ever, cause fires on their own. However, they can be part of a chain reaction that leads to a fire.

Here’s how this could happen. You’re driving along, and a spark from your engine flies off and lands on some oil on the ground. The spark sets the oil alight, which then sets fire to the ground. The fire spreads, causing damage to nearby properties and hurting people.

This chain of events is unlikely because engine oils aren’t usually hot enough to catch fire. But they could be if they’re in a high-temperature environment like an engine.

There’s a difference between “catching fire” and “exploding.” An explosion is a very rapid burning that generates a large amount of force, usually enough to break a container open.

The sort of engine oil fire you are most likely to see involves a pool of oil that’s been heated to where it catches fire. It burns for a little while and then goes out. This isn’t an explosion. It’s an example of something catching fire and burning.

Most engine oils don’t explode. However, some types of synthetic oil can be more explosive than others.

At What Temperature, Does Motor Oil Catch Fire? 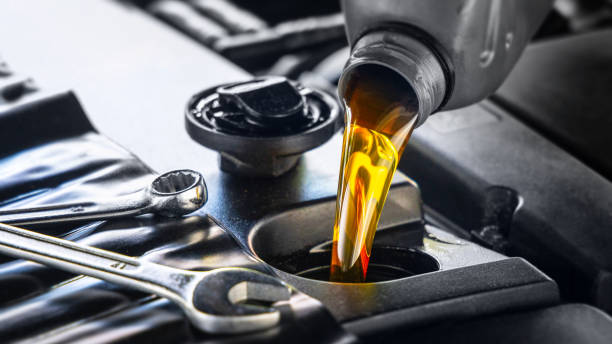 There are so many variables involved here. The amount of oil, the viscosity (thickness) of the oil, its composition, and how much air is in the container all affect how hot it can get.

The temperature at which oil will catch fire is between 400 and 500 degrees Fahrenheit. That means that above that temperature, the oil will ignite and burn.

To show how hot that is, 100 degrees Celsius (212 Fahrenheit) is the boiling point of water. It’s also the temperature inside a car during the summer when the air conditioning isn’t running.

Even with all these variables, it’s safe to say that engine oil won’t catch fire below a certain temperature.

How Do I Dispose of Motor Oil?

If you’ve removed the oil from the container, dispose of it at a recycling center. Don’t throw it in the trash because the oils could contaminate the soil if they’re not disposed of properly.

In case of oil spillage, clean it up with a bucket of water and some sponges. Don’t use a vacuum or dry cleaner because it could suck up the oil and worsen the problem.

You can also use a commercial product to help remove the oil from the ground. One example is Ecoline Oil-Dissolver.

Can Oil Catch On Fire If Spilled On Engine?

Likewise, the oil won’t catch fire if your engine is warm but not hot. You should clean up any oil spills as soon as possible to reduce the risk. You should also be extra careful if you have a leaky engine that’s producing oil.

If you have an oil leak, you can reduce the fire risk by parking in an open space and monitoring your engine temperature.

Why Is Motor Oil Bad For The Environment?

Oil spills are harmful to the environment because they contain harmful substances, like hydrocarbons and heavy metals. These substances can damage aquatic ecosystems, kill wildlife, and disrupt human activities like fishing and swimming.

Other pollutants released by motor oil are CO2 and methane, which are harmful to the environment, too. This means we should take care of how we dispose of contaminated oil.

Ways to dispose of oil safely include burying it in the ground, placing it in a sealed container, or taking it to a recycling facility.

Overall, we recommend that (motor oil) engine oil is not flammable. While motor oil can catch fire under certain circumstances, it is not easily combustible and does not pose a significant fire risk.

There are several factors that contribute to whether or not motor oil is flammable. For example, the type of motor oil, the temperature, and other combustible materials. In most cases, motor oil is not flammable.

While the exact flash point of motor oil varies depending on the type of oil and the additives present, it is agreed that motor oil will ignite and burn at temperatures above approximately 600°F.

However, there are some circumstances in which motor oil can catch fire. For instance, if the motor oil is exposed to high temperatures, it can become combustible. If other combustible materials are present, such as gasoline or oil, the risk of fire increases.