Is nail polish flammable? This is one recurring question common among people who use nail polish regularly.

So if you’re reading this article, it means you’re one of them. And you’re not alone;

let’s find out if nail polish is flammable and why.

Yes. Nail polish is flammable, especially when it is wet. This is because it comprises different chemical components and solvents, including nitrocellulose, acetone base, and plasticizers, which are highly flammable substances.

These components give the nail polish a liquid form and make it spread smoothly on the nails. Some of the primary solvents also include isopropanol which is highly flammable.

However, once it dries up, it loses most of its flammable potency. Nail polish is no longer flammable, though it could catch fire in some situations. For instance, when you put dried nail polish on a naked flame, it doesn’t catch fire immediately. It usually takes longer for it to ignite and catch fire.

The polish takes a few seconds to dissolve into liquid before it catches fire. So we assume that you probably would have pulled your hands away from the fire in those few seconds.

Nail polish is lacquer used on both finger and toe nails to make them look beautiful and to protect them from damage. They have colorings like fish scales or titanium dioxide that give them a sparkly look. Dyes and adhesives are also added to nail polish to give it its distinct polish colors and help with bonding to the nail.

Nail polish is flammable, so you must be careful when using it around high heat or flames. Though nail polish fires are not so common, you should know when wet nail polish is exposed to naked fire or a spark of flame, it will catch fire.

Does nail polish catch on fire?

To give a short answer, yes, it does. Nail polish can catch on fire mostly when it is wet. It is even considered combustible because of the chemical components used to make it.

If enough heat is applied near a nail polish, it will burn with no external oxygen source needed. This is mainly because of the acetone base used.

The possibility of nail polish catching fire on its own is quite rare. However, it will definitely catch fire when exposed to fire or spilled on flame.

However, it is not likely to catch fire immediately if you put it near a fire or a heat source. Most gel nail polish is made with solvent substances like acetones and alcohol-based products.

Is nail polish okay in heat?

Depending on how hot it is, nail polish may not be okay in heat. If, for instance, you put it safely in a sealed jar and it is not placed directly under sunlight for a long time, your nail polish will most likely be safe.

However, when wet and exposed to high heat or a temperature of about 450 degrees Fahrenheit, nail polish can explode and is quite dangerous for anyone around. Once it becomes hot, what happens after is shocking.

The acetone content in the nail polish releases vapor, which expands and causes the bottle to blow up. Assuming nail polish is coated beautifully on your nails, heat doesn’t affect it. It may most likely break out of your nails or affect the color shade. 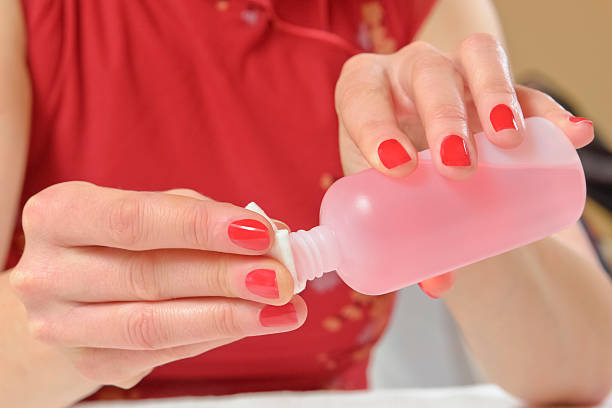 Absolutely, yes. Just like nail polish, nail polish remover is flammable and highly combustible. And more so because it is a solution made of pure acetones, which re-moisturizes and dilutes the nail polish on your nails.

Acetones are very flammable and do not take time to burn. Interestingly, your nail polish remover doesn’t need flames to ignite a fire. Once it is placed close to heat, the vapor from the heat alone is enough to cause a fire flash.

In 2015, a 20-year-old Texas woman suffered third-degree burns while using nail polish remover close to a candle. It is pretty dangerous.

Can you fly with nail polish?

The short answer to this is yes. You can fly with nail polish as long as you adhere to the liquid rules of flying on a plane. According to the Transportation Security Administration in the USA, nail polish, when packed in a carry-on bag, should be less or equal to 3.4oz/100ml.

The bottles must fit comfortably in a single-sized resealable bag along with other travel-sized liquids, gels, and lotions. TSA is an agency run by the US government. They are concerned with protecting the transport system of the USA.

Can I leave nail polish in a hot car?

No. Please do not leave your bottle of nail polish exposed in a hot car.

While the chances of causing a fire may be slim, once the bottle is hot enough, it can explode in your car.

This is because heat causes the acetone base to release vapor that blows the bottle up. So ensure you keep your nail polish in a cool place to avoid the risk of explosion.

Nail polish is very flammable, mostly when wet, so you are advised not to light a cigarette around it and expose it to naked flame or sunlight to avoid explosions.

It is best to store in a cool, dry place, away from sunlight, to preserve it. Though nail polish may not catch fire when exposed to sunlight or heat, its longevity could be altered, and you do not want that.

You can watch this video to learn more about nail polish’s chemical compositions and flammability.