Shaving cream is a grooming item that most men can’t do without. However, it is also rich and chock-full of organic chemicals, 7% of which are very flammable.

But does this tiny fraction of a shaving cream make the entire cream flammable? In this article, we will find out about that and how you can keep safe when using shaving creams.

But first, let’s get this out of the way:

Yes, shaving creams are flammable because most brands use highly inflammable isobutane, propane, and butane as their aerosol propellants.

Isobutane, especially, is often a good choice because it is quite compressible and it keeps a good amount of pressure bottled up in the can. So, when opened, it pushes the cream-gel towards the can lid and gently lets it squirt out of the can.

However, when heated, the isobutane, which exists as a compressed gas inside the shaving cream, builds up pressure. This pressure occurs as the isobutane molecules try to find an escape path.

Over time, the pressure will increase to a level where the can or container can no longer hold it. At that point, the shaving cream bottle will explode.

One such case occurred in 2013 when a 50-year-old man landed in an ambulance simply because he tried to heat his shaving cream can.

According to him, he intended to have a hot shave that day. So, warming his shaving cream canister on a kitchen stove was the idea that popped into his head. After a loud explosion that made news, he told the rest of the story in an ambulance.

What Other Components Are There in Shaving Creams?

Shaving creams contain a lot of chemicals. The good news is that most of those chemicals are organic and the composition varies according to the brand.

But if you run through the database of Google Patents, you realize that a standard shaving cream should have some or all of the following chemicals:

Triethanolamine, aka TEA, was once the primordial chemical that led to the invention of weaponized mustard gas.

In shaving creams, TEA acts as a mere thickening and wetting agent. That means it helps water to flow more freely by improving the surface area and lowering the surface tension that holds droplets together.

By doing that, the water molecules in the shaving creams will have better structural integrity. And that’s why TEA is a common ingredient in shaving creams.

Palmitic acid is a fatty acid got from palm oils and animal fats. Most times, it’s used to make soaps. And like in soaps, Palmitic acid makes shaving creams lather easily.

Besides that, it enfolds hair follicles and holds them in the right position for easy shaving.

This is a common additive in cosmetics. It’s waxy, and it makes the skin soft when used alone.

When used alongside TEA, stearic acid upgrades into a powerful thickener that produces nice lather.

While shaving, you need your hair to be upright so that shaving can be easy. One agent in shaving creams that does that is Iso-pentane, which breaks down the oil your skin produces.

Normally, Iso-pentane produces gasoline-like scents. But the perfume in the shaving cream masks that smell.

What this plant oil does is simple – its fatty acid bonds with other components in the shaving creams.

That way, the cream will remain as a gel just until you rub your palm over it. As soon as you do that, air leaks into the molecular space, and like that, the cream foams.

Other ingredients include the PEG 90M which functions as a lubricant, polyvinyl pyrrolidine that sticks to the hair shaft to keep them upright as you shave, and aloe vera which softens the skin and heals nicks.

There’s also a compound named sorbitol, which is a cheaper alternative to glycerine. Both moisturize the skin.

Do Shaving Creams Explode on a Plane? 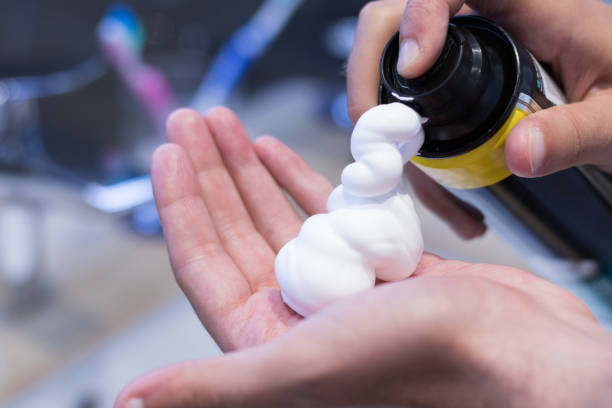 This will happen because of the pressure difference inside and outside the can, followed by the uneven expansion that leads to an explosion.

However, this happens to almost every pressurized fluid when exposed to a pressure lower than its packaging pressure. In modern airplanes, pressurized cargo holds help to reduce this risk.

So, there’s nothing wrong with keeping a can of shaving cream as you fly a plane. But the thing is, it has to follow the guidelines of the transportation security administration, TSA.

According to the TSA, no one should carry above 3.4oz/100 ml of shaving creams on a plane. But you can carry less.

In this article, we noted that shaving creams are highly flammable and can explode when heated directly or when confined in a place under high pressure.

Some brands like the Barbasol and Gillette original shave creams even publish safety data sheets that confirm the flammability and explosive nature of their creams. So, you really need to be cautious when handling and storing shaving creams.

As for the handling part, here are a few tips you can stick with to keep safe:

And that’ll be all.