Is Sulfur Flammable? (Does sulfur catch on fire?) - FlameVenge
Skip to content

Sulfur, also spelled sulphur, is a major ingredient in our skin care products, fertilizers, car batteries, and lots more. But despite its popularity, sulfur is a Class-4 hazardous substance because it can produce a poisonous gas and catch fire. However, does this technically make sulfur flammable?

Let’s start with that general question then:

Is Sulfur Flammable or Explosive?

Sulfur belongs to a class of solids known as flammable solids. Like most solids in this class, sulfur can catch fire ‌easily and even auto-ignites around 320⁰F – 374⁰F as a crystalline solid. In its powdered form, sulfur’s flammability upgrades, and it can even explode.

According to the Agricultural Retailers Association (ARA), such explosive fires often happen on farms where farmers blend sulfur dust with their fertilizer products. While blending, most farmers are ignorant of the fact that sulfur particles can become airborne.

In the air, the sulfur particles will develop surface charges and repel one another. The particles then remain in the air until an ignition source, as little as a mild electrical spark, comes around. If it does, the resulting fire and explosion can take lives.

However, if it’s any comfort, sulfur is not the only solid that reacts this way. Virtually all powdered solids can, including flour.

However, sulfur, because of its chemical nature, is even more flammable, explosive and dangerous. In later sections, we’ll explain why.

There are several reasons for the high flammability of sulfur. Some of these are quite technical. But we’ll try to break them into assimilable bits:

Normally, sulfur is an element often represented with S8 in the science world. But when you burn it, it transforms midway to a state called Sy just before it fully ignites.

According to a research paper published in the Fire Safety Journal, this Sy-phase of sulfur burns with more ease than the original S8 state of sulfur.

Finally, this makes the overall ignition temperature of sulfur fall below 400⁰F. It can even go down to 320⁰F, depending on the amount of hydrocarbon impurities it contains. For instance, dark crude sulfur once reportedly burns at 335⁰F.

Sulfur has premium insulation qualities. But likewise, it picks up static electric charges, which continue to pile up as the powdered sulfur particles gather in the air.

If particles reach about 25% by mass in the air, the static electricity can discharge and act to ignite the sulfur particles. So, at the right temperature, even weak frictional sparks can light up a sulfur cloud.

In chemistry language, activation energy is just an energy barrier that any reaction must overcome before it occurs. That means, for sulfur to burn in oxygen, the heat produced must possess a certain amount of energy.

According to a research paper from the Murdoch University of Australia, the energy needed for sulfur to burn is about 89 KJ for every mol of sulfur. Compared to other solids, like carbon (45 kcal or 188 KJ), sulfur’s oxidation activation energy is quite low.

This means that sulfur can burn much faster than carbon. So, it’s no wonder why sulfur has such a facile ability to catch fire and burn.

How Hot is Burning Sulfur: Is It Hotter Than Regular Fire? 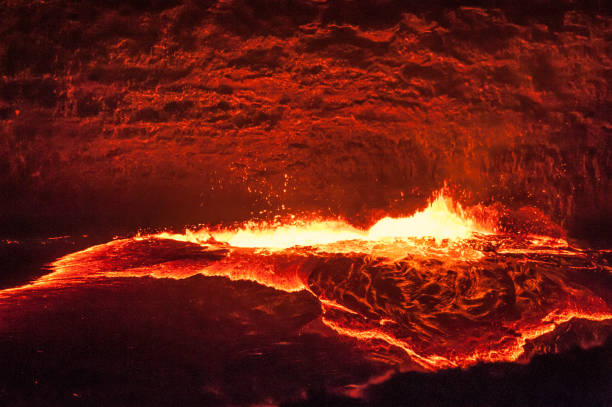 There’s no standard of how hot a fire can be because different fuels that power different flames burn at different temperatures. But on average, most fires can reach temperatures between 400⁰F and 9000⁰F.

As for sulfur, it can produce up to a recorded value of 832.6⁰F, which is the registered boiling point of sulfur. As long as more sulfur remains, it keeps burning; the temperature keeps rising and no one really knows how high that can be.

So, let’s look for another subtle way to explain things. Normally, one kg-mol (that is 70.70 lbs) of sulfur produces 300 megajoule (MJ) of heat.

In real life, this can power two steam engines for a while.

Why Is Sulfur Dust So Explosive?

Not all substances that burn can explode. But a cloud of sulfur dust can do both because, unlike its solid form, powdered sulfur has a larger surface area. That means it reacts way faster with oxygen than in the solid form.

Worse still, sulfur dust easily reacts with iron or ferrous substances like steel components of storage silos to form ferrous sulfide. This ferrous sulfide is so explosive that water and moist air is enough to ignite it. 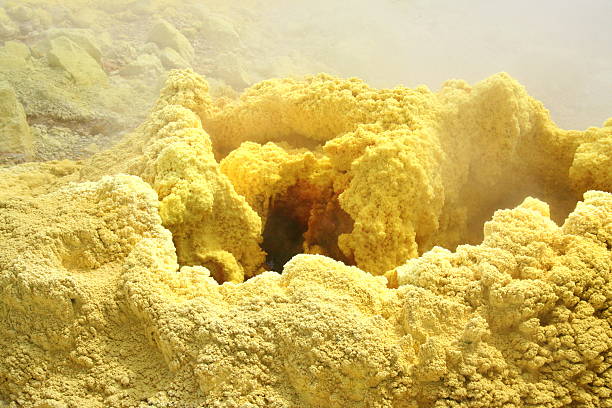 When sulfur burns in air, the sulfur gas formed is Sulfur dioxide. According to its safety data sheet, this sulfur dioxide is not flammable on its own.

Despite its non-flammability, sulfur dioxide is quite toxic. Inhaling it can cause eye irritation, choking, lung problems and death by asphyxiation.

Besides sulfur dioxide, sulfur can also produce hydrogen sulfide if it reacts with certain organic compounds. This hydrogen sulfide smells like rotten eggs and it occurs naturally in gas wells, volcanoes, manure pits, and sewers.

As you might have guessed, hydrogen sulfide, unlike sulfur dioxide, is highly flammable.

Is Sulfur Flammable With Water?

So far, we tried explaining how pure sulfur catches fire. What happens when it becomes mix with water?

Well, unlike sodium, which reacts vigorously with cold water, sulfur does not burn or explode in water under normal conditions. Rather, the sulfur gets diluted when added to water, and it can produce a slightly acidic solution.

However, to be safe, it’s best to add sulfur to water and not the other way round to prevent spurting. This is one of the most basic things learnt in science experimental classes.

But remember that we said that normal conditions make one reason sulfur doesn’t burn or explode in water. If you mix it with both water and silver bromate, things can get out of hand pretty fast, and a fatal explosion can occur. So, watch out.

How Do You Extinguish Sulfur Fires?

Depending on the cause of fire, extinguishing media may also differ. For instance, water won’t be suitable for killing gasoline fires because gasoline floats on water. Whereas, a dry carbon dioxide extinguisher works well.

For sulfur fires, here are the extinguishing media, the dos and the don’ts:

In this article, we noted powdered sulfur is highly flammable. Because for one, it has a high surface area, low oxidation energy, and low ignition point.

Then again, sulfur dust readily picks up electrical charges in the air, and in a jiffy, the particles can ignite.

On burning, sulfur produces a non-flammable but toxic gas called sulfur dioxide. As said in this article, this gas can cause nasal and eye irritation, lung problems and, in fatal cases, can lead to death by asphyxiation.

To keep safe in places that deal with large amount of sulfur, you can try these:

If you do these, you should be safe. But you can also visit the National Fire Protection Agency’s official page to learn more. For other flammables, these articles can help.