Tar is a dense, tacky fluid that usually emerges as one of the by-products of crude materials such as coal, wood, and peat, in a process known as the “destructive distillation.” However, is tar flammable, and are we putting our homes and roads at risk of fire by using tar itself or tar products? We shall find out in this guide.

The famous tar which you can also call asphalt or pitch is black (sometimes deep brown), and a gummy substance with a characteristic sharp smell. Plus, tar is a mixture of several hydrocarbons and some amounts of pure carbon.

Tar is prepared in large quantities from hydrocarbons through the destructive distillation process. And aside from being produced via the distillation method, tar can be found naturally on the earth’s crust.

However, this unique substance (natural tar) only occurs in strategic regions of the world. For example, natural tar is usually found in the “La Brea Tar Pits” in Hancock park in Los Angeles, United States of America.

We also have the wood tar which is principally prepared from pine wood. All forms of tar are popularly used as sealing agents for sailing vessels, boats, and ships owing to their sticky nature.

Tars are applied on ships with the sole aim of preventing the ships’ wooden makeup from withering. When the wooden components of a ship are intact, it will prolong its sailing lifespan.

Most highway roads are also made of mineral tar or asphalt. Thus, are our roads prone to a fire outbreak simply because of their tar content? Let’s discover! 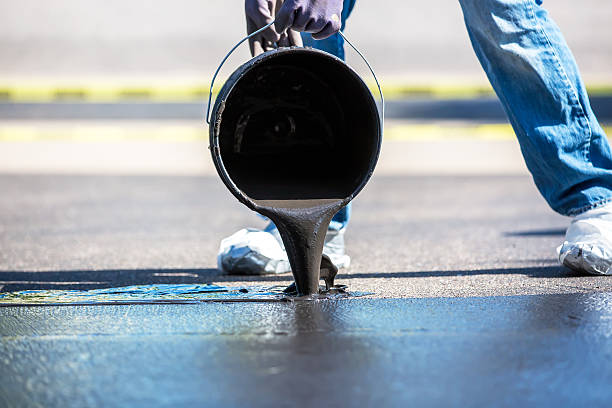 Although it depends on the type of tar one deals with, we consider tar an extremely flammable fluid. Tar ignites rapidly to give off highly flammable and toxic smoke or vapors.

Both the extraordinarily thick tar and the liquidized tar can catch flames readily when brought near an open fire or sparks. Any clothes stained with rags can also flame up easily and spontaneously.

Thus, it is very important to wipe off tar stains on clothes or even rags just the same way you would do with gas spills. This is because it is only a matter of time before a burning cloth spreads fire in the entire house.

The vapourised form of the roofing tar is relatively flammable. However, ordinary roofing tar can only combust and can not flame up in the proper sense.

Unlike some forms of tar, dry tar can react vigorously with oxidizers. And due to this, it catches flames faster than other forms of tars.

Note that dry tar can trigger an explosion in extreme cases. So, the short answer is yes, dry tar is flammable.

How About Road Tar?

Yes, road tar is flammable but not really… The tar on our highways is fairly combustible, thus, we are safe with this kind of tar when compared to other types of tar.

However, when road tars face prolonged exposure to an open blaze or inferno, it is likely to ignite and spread a fire.

The simple answer is yes, coal tar is highly flammable. It can pose a very hazardous fire threat if misused.

Hence, make sure you store coal tar appropriately while keeping some safety precautions in mind. And always keep coal tar away from any ignition sources.

What Happens When You Heat Tar? 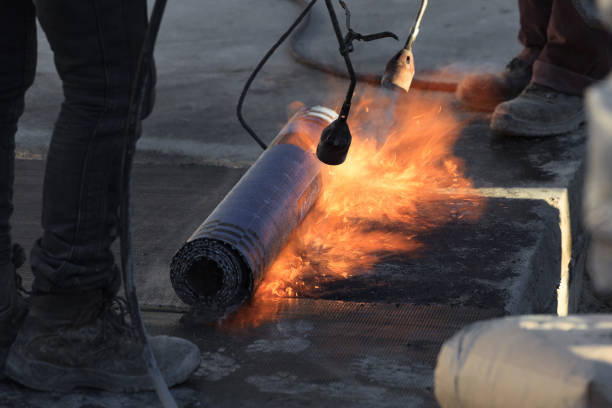 Typically, tar has high viscosity (relatively thick). And when you subject this fluid to a specific hot temperature, it undergoes some changes.

First, tar becomes less viscous and because of this, it flows faster along a narrow tube or container. Then, it develops foams and gradually rises to the tip of this container.

Thereafter, the overfilled tar container will shed off some drops of tar on its sides or the floor. So, if the accumulated drops of tar on the floor come in contact with another fire source, it will be only a matter of time before the tar ignites.

Why Is Burning Tar Always Sticky?

Unlike burning bamboo, burning tar always appears sticky, majorly because of the movement within the tar molecules. When tar burns, it becomes less viscous and more elastic.

Inhaling tar smokes for a longer period can come with a lot more health hazards than you can ever imagine. Sniffed tar smoke can tamper with one’s respiratory system by irritating it.

Moreso, just like acid fumes, tar fumes can cause choking and eventually trigger asphyxiation when you inhale them in large concentrations. In short, tar smoke is carcinogenic because of its poisonous side effects.

Thus, an asthmatic patient shouldn’t lurk anywhere around burning tar. This is because inhaling tar smokes within the slightest period can prompt their asthmatic attack.

Apart from its setbacks, tar also has some advantages, and in fact, it has a broad range of uses in our everyday life. Coal tar can be used in the manufacture of some hair shampoos.

Meanwhile, guess what? Shampoos made from coal tar are effective in testing psoriasis (a condition in which the scalps become flaky) more than any other shampoo.

Tar can be used in the construction of roads and as a waterproof shield for roofing materials, boats, and ships. You can also use tar to protect the outer part of a building.

Many industries use tar as an additive ingredient in cosmetics, flavorings for foods and candles, a source of fragrance for a sauna, etc.

Considering the above guide, we conclude that tar is a flammable substance. And even though tar’s flammability nature depends on its types, it doesn’t annul the fact that a larger percentage of the popular tars are flammable.

Hence, to ensure your maximum safety from fire when dealing with tar, keep the fluid away from any likely sources of fire. You can also visit here to check out the safety data sheet for tar.