Is Vodka flammable? Does vodka light on fire? - FlameVenge
Skip to content

At the end of a stressful day, sipping a glass of vodka can be refreshing.

However, have you ever wondered if this special alcoholic drink you’re addicted to can catch fire?

In this article, you will discover what vodka is all about and whether it is flammable.

Vodka is first-class alcohol prepared from almost anything.

You can prepare vodka from fruits, honey, potatoes, grains, or any other edible items. And after the preparation process, the components of vodka are narrowed down to just ethanol and water.

You can drink vodka as a pure drink or as a mixed drink (by combining and shaking it with other liquors). Most vodkas comprise 40% alcohol by volume while water occupies the rest volume. However, some vodkas have greater alcoholic content. These vodkas are known as “higher proof vodkas.”

The main composition of all alcoholic drinks is ethanol, except for vodka. Vodka also contains ethanol but in its diluted form. You can call vodka a “dilute ethanol.”

Ethanol is volatile, flammable alcohol. Owing to this, we can predict vodka as a flammable liquid. But since we can’t be so sure, let’s find out.

Yes, Vodka is a flammable liquor. This is because it contains ethanol—a fermentation product with a burning taste. Ethanol ignites easily when it is over-exposed to bare fire or sparks.

Vodka with 80 proof can ignite. However, they are not flammable in the proper sense. Why? It’s simple. Their alcoholic content is too low to endure the fire they kindle. More so, the water in 80-proof vodka is enough to put out the fire.

Vodkas with higher proofs above 80 are considerably flammable. This is because their alcohol content can kindle and sustain a fire.

Vodkas with 100 proof are totally flammable. Thus, make sure you don’t bring this kind of vodka (higher proof vodka) near a naked blaze to avoid an explosion.

At What Alcohol Proof Vodka Is Flammable?

Vodka is flammable when its alcoholic proof is beyond 50% or exactly 100%. This theory also holds for other forms of alcohol.

100-proof vodka or flaming vodka is usually produced in large quantities by famous alcohol brands. This is because there is a high demand for higher-proof vodkas all over the world.

Can You Drink Flaming Vodka?

You’re free to drink flaming alcohol. However, you need to observe some necessary precautions while drinking them, especially flaming vodka.

Truth be told, flaming drinks are not safe to be prepared at home. Flaming drinks can be dangerous to take if you’re not cautious enough.

First, make sure you don’t take flaming vodka while it is still on fire. Also, ensure you’ve successfully put out the blaze before drinking a flaming vodka. Feel the flaming vodka glass and ensure it is not too hot.

If the glass is boiling, allow the flaming vodka to cool for some minutes. Moreso, note that it is not advisable to sip flaming vodka with a straw. This is because straw is a plastic material and the hot vodka can melt the straw.

So probably, you might swallow the melted straw along with the vodka. And taking in plastic is not good for your health.

Is Vodka Flammable After It dries? 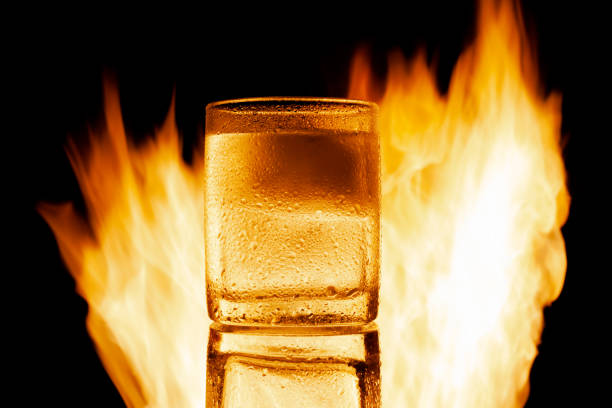 No, vodka is not flammable when dry. Vodka comprises ethanol and water. So when vodka dries up, its contents evaporate. Both the water and ethanol evaporate.

Even if oxygen or air is present, vodka will not ignite. As you can see, there’s nothing left to burn after the evaporation.

Can Vodka Be Lighted On Fire?

Sure, you can light vodka on fire. However, the flame produced by vodka only lasts for a few minutes. Vodka produces a sharp, blue flame when set on fire.

Some vodkas might not burn well like you expect them to. This is because their ethanol content is low. But vodkas above 80 proof will burn steadily in the presence of naked flame.

What Is The Flashpoint of Vodka? 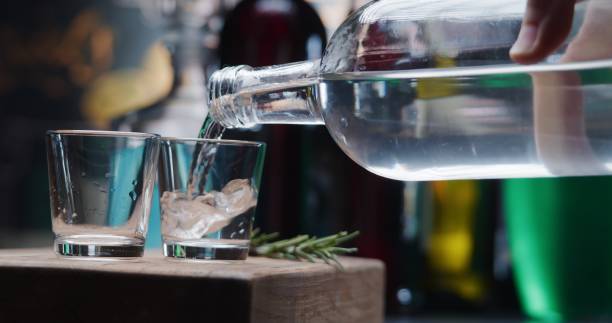 Alcohols with 40% ABV (the equivalent of 80 U.S. proof) will catch fire readily at high temperatures. At a temperature like 55°F, these alcohols will kindle fire. Vodka is one of these liquors. Thus, 13°C or 55°F is the flashpoint temperature of vodka.

Are All Vodkas Flammable?

Typically, not all vodkas are flammable. Most vodkas belong to the 80-proof category. Liquors with 80 proof can readily catch fire. However, they can not maintain a fire.

Absolute vodka is a brand name given to several forms of vodkas that are blended to make a single liquor. A larger percentage of Absolut vodkas are equal to or lower than the 80 proof. So they are not that flammable.

Plus, Koskenkorva vodka contains 60% alcohol and is highly flammable.

Can Vodka Be Used In A Molotov?

Molotovs are usually designed with a wick. The wick needs to be ignited before the Molotov can explode. Flammable liquids like gasoline, strong alcohols, and kerosene can be used in a Molotov.

Vodka is one alcohol that can be used in a Molotov. However, the said vodka must be of chief proof. This is because Molotov only uses liquids that burn readily for a long time.

Vodkas are pleasant drinks to take, primarily because they have a burning taste. And, of course, most alcohol drinkers love that. This article explains everything you need to know about vodka.

Now you know that vodka is flammable alcohol that needs to be handled with extreme care. Isn’t it?

However, if you prefer setting your vodka on fire before drinking it and you get stuck on how to go about it, visit here. It leads you to some take-home tips on how to successfully light vodka.