The big question, “is whiskey flammable?” bothers quite a lot of liquor lovers out there.

Even though a refreshment can’t be more spectacular than sipping a glass of whiskey at the end of a stressful day, it’s still a good idea to know if your favorite whiskey is not putting you at fire risk.

So, in this guide, we will walk you through everything you should know about whiskey, discover whether whiskey is flammable, and other necessary information.

Whiskey is hard alcohol, and one of the most famous drinks in history. If you’ve been craving a worthwhile drink to make a grand toast with your kin, you can never go wrong with a bottle of whiskey.

Whiskey is made from fermented grain mash. And the basic ingredients in whiskey are barley, wheat, corn, rye, other grains, and some additional compounds. Plus, this alcoholic beverage passes through a series of processes which include preparation, mashing, fermentation, distillation, aging, and bottling before it emerges as a nice-taste liquor.

Whiskey also contains water, alcohol, whiskey lactones, aldehydes, esters, phenolic compounds, and some extra blends. There are several types of whiskey depending on the list of ingredients each contains. However, the general ethanol+water description unites all forms of liquor (whiskey inclusive).

American whiskies like Wild Turkey, Uncle Nearest, etc are popular whiskies prepared by passing a fermented cereal mash through the distillation process. Now, let’s move to the real deal, “is whiskey flammable?’ The next section gives a perfect answer. 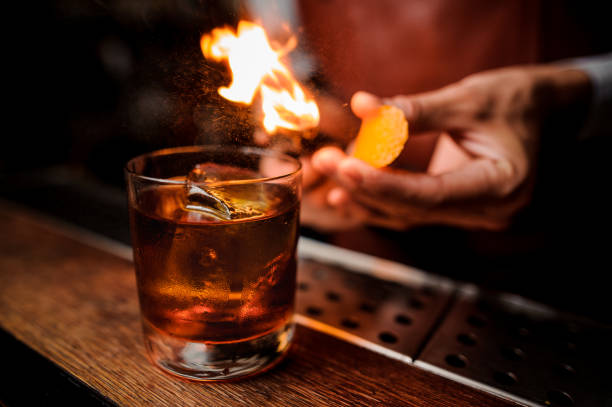 Typically, bottled whiskey or scotch whiskey with 80 Proof and 40% ABV can catch flames, but they are not considered flammable. The bottled whiskey can ignite but it can not sustain a fire because of its characteristic high water content.

Meanwhile, whiskey at cask strength (52% to 66%) which is directly from the barrel, is regarded as flammable alcohol. Shipping companies describe whiskey as a flammable liquid which is not so true.

Since every bottled whiskey contains 40%, 43%, or even 46% ABV and is at 80 Proof, they are described as non-combustible and non-flammable.

Thus, a whiskey’s flammability depends on its percentage of alcohol by volume (alcoholic strength). So, just like brandy, some whiskies are flammable, while some are not.

What Is The flash point Of Whiskey?

Liquors with 80 Proof and 40% alcohol by volume, like whiskey, have a flash point of about 79°F or 26°C. So, at a temperature above 79°F, whiskey will catch flames readily.

Just like whiskey, the flash point of other liquors also depends on their alcoholic strength or content. For example, the flashpoint of pure ethanol is 61.9°F. 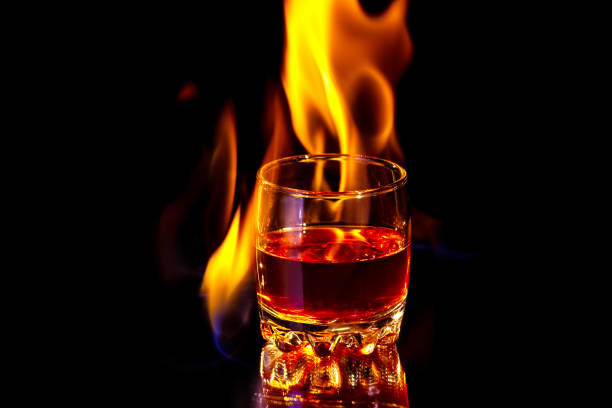 Well, it depends… Cask strength whiskey is more flammable than the popular bottled whiskey. This is primarily because the former has a relatively higher alcoholic content when compared to the latter which is just a dilute form of alcohol.

Cask-filled whiskey has higher alcoholic strength (52% to 66%) before it passes through the bottling stage. Bottled whiskey is usually diluted and blended with other whiskies to alter and stabilize its alcoholic content to 40% ABV.

Owing to this, cask-strength whiskey burns rapidly and steadily such that it is difficult to put out a fire kindled by this kind of whiskey. Bottled whiskey also catches short-lived catch fires.

And this is because the water content in bottled whiskey is more than its alcohol content. Hence, the water in this whiskey is enough to quench the fire caused by it in no time. 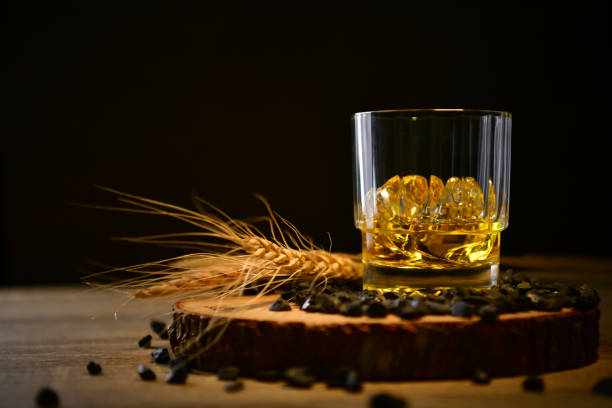 Malt whiskey is prepared from a grain mash that contains at least 51% malted barley. The alcoholic content of malt whiskey is less than 80 Proof. Hence, it is not flammable.

Rye whiskey is made up of at least 51% rye. The alcoholic strength of rye whiskey is 40% ABV which describes it as non-flammable alcohol.

What About Rye Malt Whiskey?

No, rye malt whiskey is not flammable. This whiskey is prepared from 51% malted rye mash and it is an 80 Proof liquor.

Corn whiskey is distilled from an 80% corn mash. Sometimes, it is aged in intact barrels. Corn whiskey is an 80 Proof alcohol. Therefore, it is not flammable.

Bourbons are not flammable because they contain 40% alcohol by volume. Moreso, bourbons and some American whiskies are not technically whiskies, although they contain alcohol. Bourbons are prepared with 51% maize and undergo aging in charred oak barrels.

The water content of wheat whiskey will not allow it to burn for a long time. Wheat whiskey contains 40% alcohol by volume. Thus, it is not flammable.

Johnnie walker whiskey catches flames for a while, but they are not flammable. However, some stronger versions of Johnnie whiskey are highly flammable.

Jameson is an Irish distiller who prepares whiskies with mostly 80 Proof. There are different whiskey produced by Jameson’s brand but the good news is that none of them are flammable.

However, they are some aged Jameson whiskies that are likely to catch and keep a fire burning. A 12-year-old Jameson whiskey can behave this way.

What About 100 Proof Whiskey?

100 Proof or 50% ABV whiskies of any form are flammable. At the 50% concentration, the water content of whiskey can no longer surpass that of the alcohol. The fire produced by this kind of liquor will be sustained.

In a nutshell, this guide elaborates all you need to know about whiskey. Now that you know some whiskies are indeed flammable (cask strength whiskey) while some will catch fire slightly (bottled whiskey), you should be careful around them.

Although most brands’ whiskey is already bottled and not a fire risk don’t let your guard down by exposing your whiskey to a naked fire. You don’t want your refreshment gathering to turn out as a fire scene.

Here is a safety data sheet for whiskey that can guide you through how to handle a whiskey with no fire outbreak. Finally, keep in mind that whiskies are not dangerous drinks, instead, they can make your day.